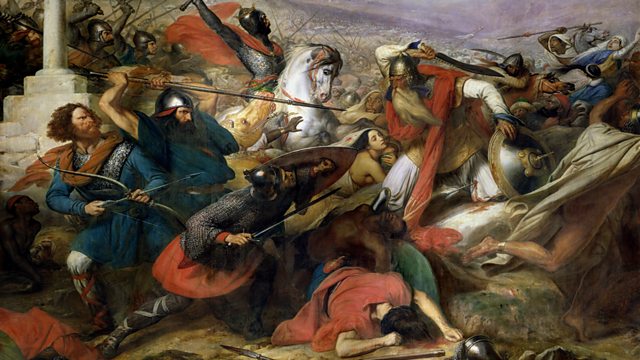 Melvyn Bragg discusses the Arab conquests which transformed the Middle East, Persia, North Africa and Southern Europe by helping to spread the new religion of Islam.

Melvyn Bragg and guests discuss the Arab conquests - an extraordinary period in the 7th and 8th centuries when the tribes of the Arabian Peninsula conquered the Middle East, Persia, North Africa and Southern Europe and spread the ideas of the Islamic religion. In 632 the prophet Muhammad died and left behind the nascent religion of Islam among a few tribes in the Arabian Desert. They were relatively small in number, they were divided among themselves and they were surrounded by vast and powerful empires. Yet within 100 years Arab armies controlled territory from Northern Spain to Southern Iran and Islamic ideas had begun to profoundly refashion the societies they touched. It is one of the most extraordinary and significant events in world history that began the slow and profound transformation of Greek and Persian societies into Islamic ones. But how did the Arab armies achieve such extensive victories, how did they govern the people they conquered and what was the relationship between the achievements of the Arabs and the religious beliefs they carried with them?With Hugh Kennedy, Professor of Arabic at the School of Oriental and African Studies, University of London; Amira Bennison, Senior Lecturer in Middle Eastern and Islamic Studies at the University of Cambridge and Robert Hoyland, Professor in Arabic and Middle East Studies at the University of St Andrews

The Music of the Spheres