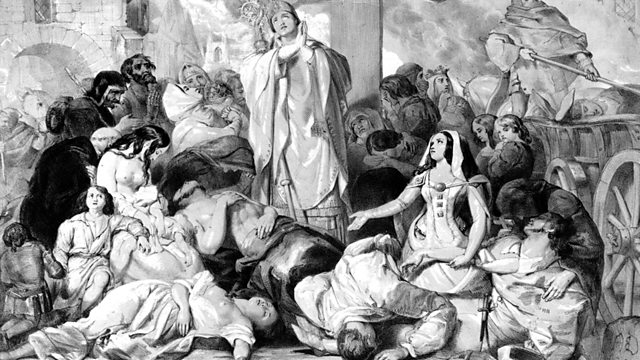 Melvyn Bragg and guests discuss the Black Death and the way medieval communities responded to it.

Melvyn Bragg and guests discuss how the Black Death influenced the structure and ideas of Medieval Europe. In October 1347, a Genoese trading ship arrived at the busy port of Messina in Sicily and docked among many similar ships doing similar things. But this ship was special because this ship had rats and the rats had fleas and the fleas had plague. This was the Black Death and its terrible progress was captured by the Florentine writer Giovanni Boccaccio who declared “in those years a dead man was then of no more account than a dead goat”. In the long and unsanitary history of Europe there have been many plagues but only one Black Death. It killed over a third of Europe’s population in 4 years – young and old, rich and poor, in the town and in the country. When it stopped in 1351 it left a continent ravaged but transformed – the poor found their labour to be valuable, religion was both reinforced and undercut, medicine progressed, art changed and the continent awash with guilt and memorialisation. With Miri Rubin, Professor of Medieval and Early Modern History at Queen Mary, University of London; Samuel Cohn, Professor of Medieval History at the University of Glasgow; Paul Binski, Professor of the History of Medieval Art at Gonville and Caius College, University of Cambridge

The Library at Nineveh