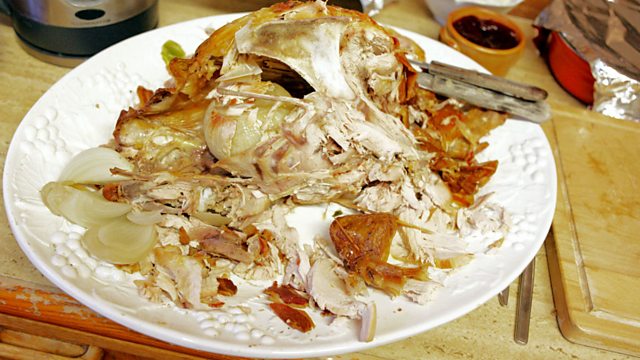 Sheila Dillon celebrates the art of eking out and reusing leftovers.

Leftover food has itself been made over – no longer about thriftiness, it’s now part of the green movement to reduce waste, and save the planet. Sheila Dillon celebrates the art of eking out and reusing, and charts the journey of leftovers from thriftiness to saving the world.

Sara Parker reports and speaks to Rama Santhahram Vindlacheruvu – Women’s Institute member and instructor in Asian cookery about use of leftover foods in Indian cookery.

She speaks to Bish Muir about her plans to publish the “Scrapbook” leftovers recipe book.

And to broadcaster and now pig farmer Rosie Boycott about the waste of food caused by the ban on pigs swill – which used commercial food waste - following the 2001 Foot and mouth crisis.

We speak to environmental group WRAP about the problem of food waste – we throw away one bag in every three due to poor planning, poor portion control, and lack of household skills, with the result that we dump 6.7 million tonnes of domestic food a year.

But is using leftover food safe? We ask the FSA.

A Taste of Britain: Revisited