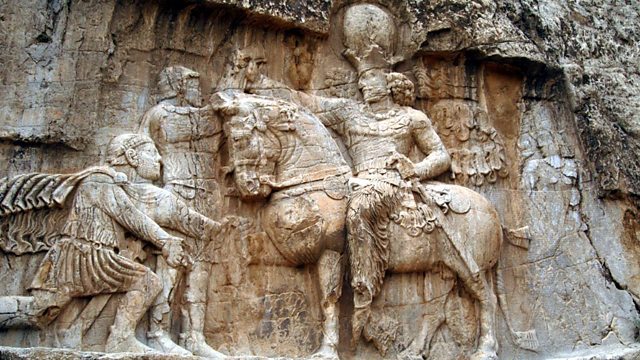 Melvyn Bragg and guests discuss the Sassanian Empire, a grand imperial rival to the Roman Empire.

Melvyn Bragg and guests discuss the Sassanian Empire. Founded around 226 AD, in Persia, the Sassanian Empire lasted over 400 years as a grand imperial rival to Rome. In modern day Iran, just down the road from the ancient Persian capital of Persepolis, there is a picture carved into a rock. It depicts a king, triumphant on horseback, facing two defeated enemies. This is no pair of petty princes, they are Roman Emperors - Philip and Valerian - and the king towering above them is Shapur I of the Sassanian Empire. So complete was his victory that Shapur is reputed to have used Valerian as a footstool when mounting his horse. This super-power traded goods from Constantinople to Beijing, handed regular defeats to the Roman army and only fell to the Islamic conquests of the 7th century. It still influences Persian identity to this day. But what was the culture and the literature of the empire, its structure and organisation? And what was its role in the great geopolitical game played out between the decaying empires in late antiquity?With Hugh Kennedy, Professor of Arabic in the Faculty of Languages and Cultures at the School of Oriental and African Studies; Vesta Sarkhosh Curtis, Curator of Iranian and Islamic Coins in the British Museum; James Howard-Johnston, University Lecturer in Byzantine Studies at the University of Oxford.