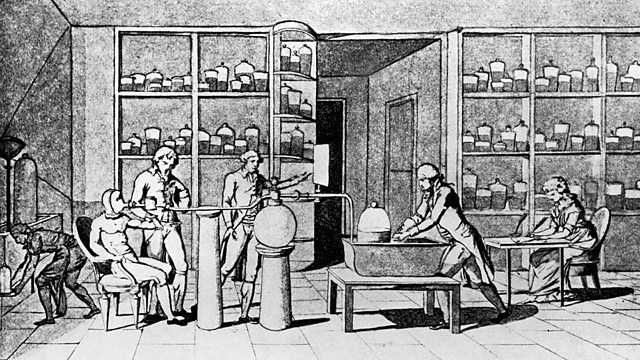 Melvyn Bragg discusses the discovery of Oxygen by Joseph Priestley and Antoine Lavoisier and the Anglo-French feud that accompanied it.

Melvyn Bragg discusses the discovery of Oxygen by Joseph Priestley and Antoine Lavoisier. In the late 18th century Chemistry was the prince of the sciences – vital to the economy, it shaped how Europeans fought each other, ate with each other, what they built and the medicine they took. And then, in 1772, the British chemist, Joseph Priestley, stood in front of the Royal Society and reported on his latest discovery: “this air is of exalted nature…A candle burned in this air with an amazing strength of flame; and a bit of red hot wood crackled and burned with a prodigious rapidity. But to complete the proof of the superior quality of this air, I introduced a mouse into it; and in a quantity in which, had it been common air, it would have died in about a quarter of an hour; it lived at two different times, a whole hour, and was taken out quite vigorous.” For the British dissenting preacher, Joseph Priestley, and the French aristocrat, Antoine Lavoisier, Chemistry was full of possibilities and they pursued them for scientific and political ends. But they came to blows over oxygen because they both claimed to have discovered it, provoking a scientific controversy that rattled through the laboratories of France and England until well after their deaths. To understand their disagreement is to understand something about the nature of scientific discovery itself. With Simon Schaffer, Professor in History and Philosophy of Science at the University of Cambridge; Jenny Uglow, Honorary Visiting Professor at the University of Warwick; Hasok Chang, Reader in Philosophy of Science at University College London.