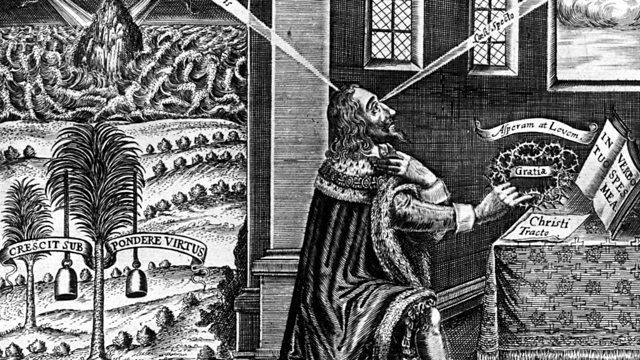 The Divine Right of Kings

Melvyn Bragg and guests discuss the Divine Right of Kings. The idea that kingly authority derives from God alone bit deep into the culture of 17th century Britain.

Melvyn Bragg and guests discuss the Divine Right of Kings. In Shakespeare’s Macbeth, the character Malcolm describes the magical healing powers of the king: “How he solicits heaven, Himself best knows; but strangely-visited people, All swoln and ulcerous, pitiful to the eye, The mere despair of surgery, he cures; Hanging a golden stamp about their necks, Put on with holy prayers...”The idea that a monarch could heal with his touch flowed from the idea that a king was sacred, appointed by God and above the judgement of earthly powers. It was called the Divine Right of Kings. The idea resided deep in the culture of 17th century Britain affecting the pomp of the Stuart Kings, the writings of Milton and Shakespeare and the political works of John Locke. It is a story that involves witches, regicide, scrofula, Macbeth, miraculous portraits and some of the greatest poetry in the English language. With Justin Champion, Professor of the History of Early Modern Ideas at Royal Holloway, University of London; Tom Healy, Professor of Renaissance Studies at Birkbeck College, University of London; Clare Jackson, Lecturer and Director of Studies in History at Trinity Hall, Cambridge