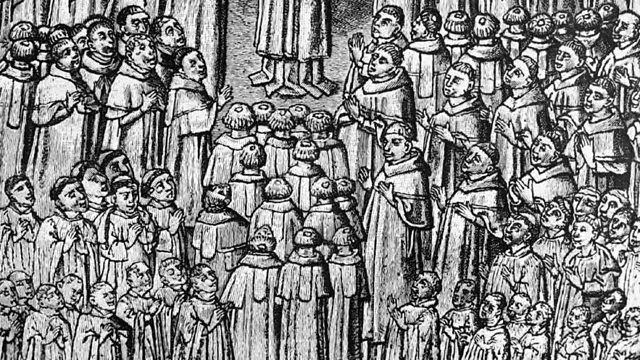 Melvyn Bragg and guests discuss the philosophical idea of Ockham’s Razor and the medieval philosopher who gave his name to it, William of Ockham.

Melvyn Bragg and guests discuss the philosophical ideas of William Ockham including Ockham's Razor. In the small village of Ockham, near Woking in Surrey, stands a church. Made of grey stone, it has a pitched roof and an unassuming church tower but parts of it date back to the 13th century. This means they would have been standing when the village witnessed the birth of one of the greatest philosophers in Medieval Europe. His name was William and he became known as William of Ockham.William of Ockham’s ideas on human freedom and the nature of reality influenced Thomas Hobbes and helped fuel the Reformation. During a turbulent career he managed to offend the Chancellor of Oxford University, disagree with his own ecclesiastical order and get excommunicated by the Pope. He also declared that the authority of rulers derives from the people they govern and was one of the first people so to do. Ockham’s razor is the idea that philosophical arguments should be kept as simple as possible, something that Ockham himself practised severely on the theories of his predecessors. But why is William of Ockham significant in the history of philosophy, how did his turbulent life fit within the political dramas of his time and to what extent do we see his ideas in the work of later thinkers such as Thomas Hobbes and even Martin Luther?With Sir Anthony Kenny, philosopher and former Master of Balliol College, Oxford; Marilyn Adams, Regius Professor of Divinity at Oxford University; Richard Cross, Professor of Medieval Theology at Oriel College, Oxford

The Siege of Orléans