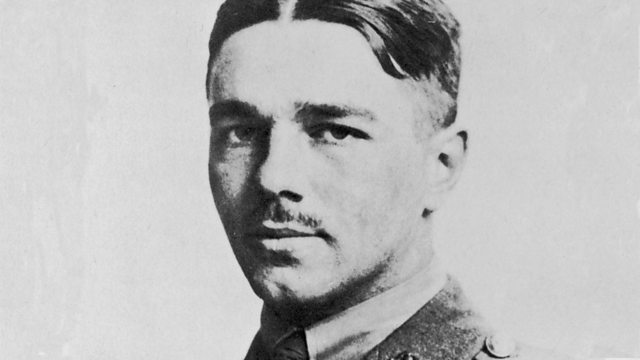 Music in the Great War: Wilfred Owen - The Soldiers' Poet

Soldiers, from a woman corporal, to General Sir Richard Dannatt, once the Chief of the General Staff, choose and read a Wilfred Owen poem, and speak of the impact it has on them.

Wilfred Owen wrote that he was a 'poets' poet'. He also wrote, in the preface to 'War Poems', 'Above all I am not concerned with Poetry. My subject is War, and the pity of War'. Owen is, then, a soldiers' poet, and the people who figure in his poems are all soldiers. In this Between the Ears, soldiers, all serving when they were recorded, choose a Wilfred Owen poem, explain why, read it and speak about the impact it has on them.

They range from Barbara Ennis, a corporal, who chooses 'Dulce Et Decorum Est' because Owen's description of a gas attack matched her own experience, to General Sir Richard Dannatt, who was the Chief of the General Staff. He considers the worst fate that can befall a soldier - going mad. David Hamilton joined up as a boy, Justin Featherstone fought as a second lieutenant, Owen's rank, and one was awarded, like the poet, the Military Cross.

They reflect on killing, on boredom, the covenant between soldiers and the society they serve - and the civilian population's lack of understanding. 'The Soldiers' Poet', first broadcast in 2006, was an early catalyst to the debate about this that continues to this day. These are what Wilfred Owen's poems, written a lifetime ago, address. They speak to today's soldiers, whose readings of the poems have arresting immediacy.

Soldiers get to the point, make it quickly and move on. This, their poetry programme, cracks along, reflecting their brisk clarity. There is no presentation, just essential information - who the soldiers are and where they have served - the equivalent of giving name, rank and number.