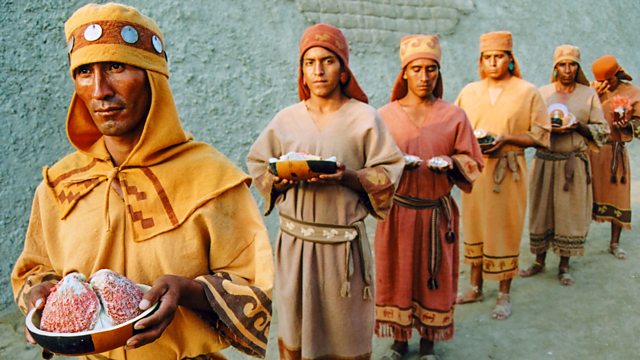 The Cursed Valley of the Pyramids

Lost Cities of the Ancients
Episode 2 of 3

Documentary series which unearths lost civilisations and cities. This edition visits northern Peru to find the ruins of 250 mysterious pyramids.

In the Lambeyeque valley in northern Peru lies a strange lost world - the forgotten ruins of 250 mysterious pyramids, including some of the biggest on the planet, colossal structures made out of mud bricks. Long ago, the Lambeyeque people were haunted by a terrible fear and believed that building pyramids was essential to their survival. Their obsession reached its height at a city called Tucume, an eerie place of 26 pyramids standing side by side, the last pyramids this civilisation created before they vanished forever.

What was the fear that drove these people to build so many pyramids, what were they for and why did the whole civilisation suddenly vanish? This film captures the moments when archaeologists at the site uncovered a mass of bodies of human sacrifice victims, following a trail of clues into the dark story of Tucume. It recreates the strange rituals of the people of the valley, revealing a civilisation whose obsession to build pyramids eventually turned to horror, until Tucume finally vanished in a bloody frenzy of human sacrifice.

The Vanished Capital of the Pharaoh

The Dark Lords of Hattusha

See all episodes from Lost Cities of the Ancients