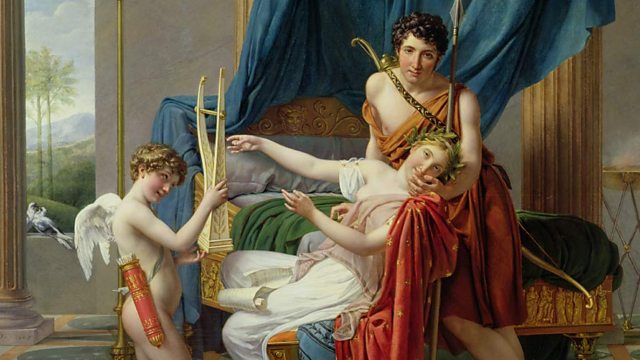 Melvyn Bragg and guests discuss Greek and Roman love poetry, from the Greek poet Sappho and her erotic descriptions of romance on Lesbos, to the love-hate poems of the Roman writer Catullus. The source of many of the images and metaphors of love that have survived in literature through the centuries. We begin with the words of Sappho, known as the Tenth Muse and one of the great love poets of Ancient Greece: “Love, bittersweet and inescapable, creeps up on me and grabs me once again”Such heartfelt imploring by Sappho and other writers led poetry away from the great epics of Homer and towards a very personal expression of emotion. These outpourings would have been sung at intimate gatherings, accompanied by the lyre and plenty of wine. The style fell out of fashion only to be revived first in Alexandria in the third Century BC and again by the Roman poets starting in the 50s BC. Catullus and his peers developed the form, employing powerful metaphors of war and slavery to express their devotion to their Beloved – as well as the ill treatment they invariably received at her hands!So why did Greek poetry move away from heroic narratives and turn to love in the 6th Century BC? How did the Romans transform the genre? And what effect did the sexual politics of the day have on the form? With Nick Lowe, Senior Lecturer in Classics at Royal Holloway, University of London; Edith Hall, Professor of Classics and Drama at Royal Holloway, University of London; Maria Wyke, Professor of Latin at University College London.