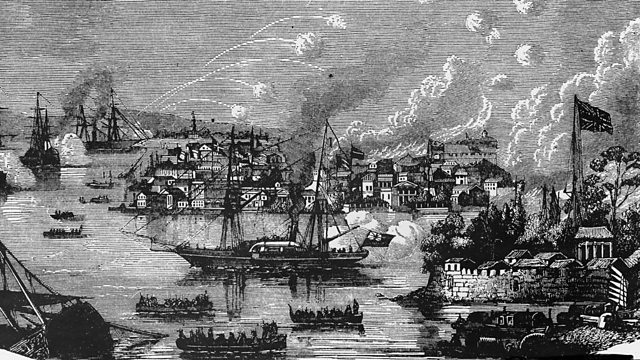 Melvyn Bragg discusses the Opium Wars, a series of conflicts in the 19th Century which had a profound effect on British Chinese relations for generations.

Melvyn Bragg discusses the Opium Wars, a series of conflicts in the 19th Century which had a profound effect on British Chinese relations for generations. Thomas De Quincey describes the pleasures of opium like this: “Thou hast the keys of Paradise, O just, subtle and mighty opium”. The Chinese had banned opium in its various forms several times, citing concern for public morals, but private British traders continued to smuggle large quantities of opium into China from India. In this way, the opium trade became a way of balancing a trade deficit brought about by Britain's own addiction...to Indian tea.The Chinese protested against the flouting of the ban, even writing to Queen Victoria. But the British continued to trade, leading to a crackdown by Lin Tse-Hsu, a man appointed to be China's Opium Drugs Czar. He confiscated opium from the British traders and destroyed it. The British military response was severe, leading to the Nanking Treaty which opened up several of China's ports to foreign trade and gave Britain Hong Kong. The peace didn't last long and a Second Opium War followed. The Chinese fared little better in this conflict, which ended with another humiliating treaty.So what were the main causes of the Opium Wars? What were the consequences for the Qing dynasty? And how did the punitive treaties affect future relations with Britain?With Yangwen Zheng, Lecturer in Modern Chinese History at the University of Manchester; Lars Laamann, Research Fellow in Chinese History at the School of Oriental and African Studies (SOAS), University of London; Xun Zhou, Research Fellow in History at SOAS, University of London