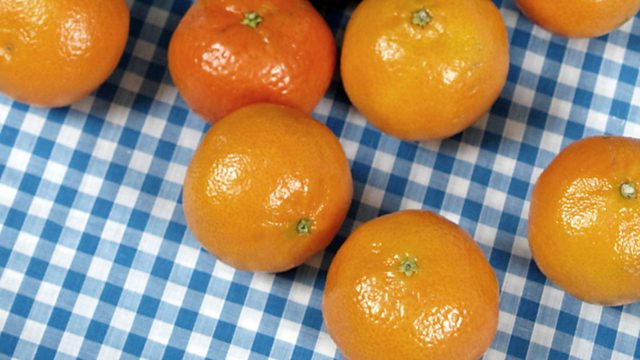 Sheila Dillon explores the tradition of orange growing in Sicily, and finds out why the unusual citrus varieties found close to Mount Etna could save a struggling industry.

Sheila Dillon explores the tradition of orange growing in Sicily and finds out why citrus varieties found close to Mount Etna could be the saviour of a struggling industry.

Competition from other producing countries like Spain, Egypt and Morocco have placed a centuries old form of farming under threat. In the last twenty years the island has lost 80 per cent of its export market.

The Sicilians believe the answer lies in concentrating on varieties of the blood orange - less well known than the so called "blondes" such as the Navel or Valencia.

The programme visits an unusual dinner organised by the Slow Food movement on the east coast of Sicily. Every dish in the five course meal uses the island's blood oranges as an ingredient. The president of Slow Food Italy, Roberto Bordese, explains the impact the abandonment of citrus groves is having on the island.

Farmer Concetto Ferrerro explains why he is one of many farmers leaving the orange groves. Land that has been in his family for generations.

The programme also visits the citrus groves of Castello di San Guiliano, near Syracusa, owned by one of Sicily’s oldest families, and meets Guillia di San Giuliano. She explains how she has found a different way of putting the citrus crop to use.

Agriculture Minister for Sicily, Giovanni La Via, talks about his ambition for improving sales of Sicilian oranges, by promoting a single variety, the Tarocco.

Sheila Dillon is joined in the studio by Emma Poggi, whose family has been importing Italian fresh produce into the UK since the 1950s, and food campaigner Caroline Cranbrook. They taste and compare the blood orange varieties Moro and Tarocco with a blonde orange variety - the Navel.