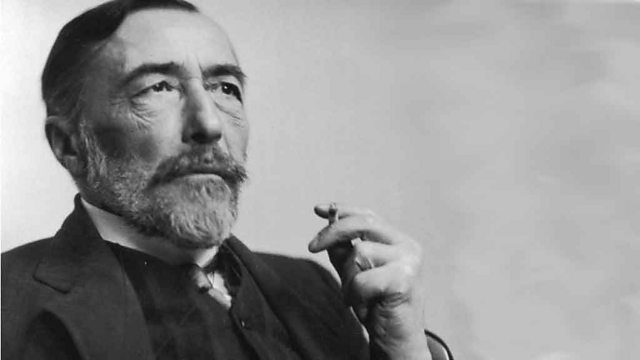 Melvyn Bragg discusses Joseph Conrad's Novel, Heart of Darkness, a critique of colonialism at the turn of the century

Melvyn Bragg will be discussing Joseph Conrad’s Heart of Darkness. Written in 1899, Heart of Darkness is a fascinating fin de siecle critique of colonialism and man's greed. Conrad draws on his own adventures for the plot. The story's main narrator is Marlow, a merchant seaman who pilots a steamship upriver in what is largely assumed to be the Belgian Congo. He finds the scramble for Africa well underway, with Europeans desperately competing to make their fortunes from ivory. Marlow's journey takes him into the interior of this mysterious silent continent. After a dangerous passage he finally arrives at the company's most remote trading station. It is reigned over by Kurtz, a white man who seems to have become a kind of God figure to the local people. Marlow is fascinated by him, preferring his messianic ravings to the petty treachery and mercenarism of the other white traders. On the journey back, Kurtz dies, whispering “the horror, the horror”.The interpretation of these words has perplexed readers ever since and the book has prompted a diverse range of readings from the psychoanalytical, that sees the novella as a metaphor for the journey into the subconscious, to feminist readings that examine how Conrad excludes female characters and focuses on the male consciousness. Conrad wrote; “My task is, above all, to make you see”. So did he intend this novella to provoke a discussion of the immorality and rapacity at the centre of colonialism? Was he questioning the hero's welcome given to those famous explorers who came back from “civilising” Africa, as they saw it? Or was he, as the Nigerian writer Chinua Achebe put it, “guilty of preposterous and perverse arrogance in reducing Africa to the role of props for the break-up of one petty European mind?” With Susan Jones, Fellow and Tutor in English at St Hilda's College, Oxford; Robert Hampson, Professor of Modern Literature at Royal Holloway, University of London; Laurence Davies, Honorary Senior Research Fellow in English at Glasgow University and Visiting Professor of Comparative Literature at Dartmouth College, New Hampshire