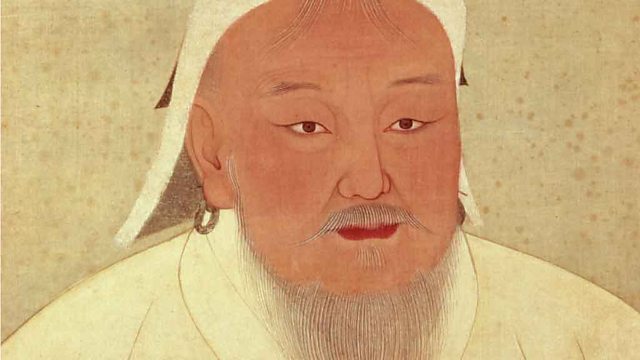 Melvyn Bragg discusses Genghis Khan and the Mongol Empire, one of the largest contiguous empires the world has ever seen.

Melvyn Bragg and guests discuss Genghis Khan. Born Temujin in the 12th Century, he was cast out by his tribe when just a child and left to struggle for survival on the harsh Steppes of what is now Mongolia. From these beginnings he went on to become Genghis Khan, leader of the greatest continuous land-based empire the world has ever seen. His conquered territories stretched from the Caspian Sea to the borders of Manchuria, from the Siberian forest to what is now Afghanistan.He was a charismatic commander and a shrewd military tactician. He was swift to promote those who served him well, ignoring race or creed, but vengeful to those who crossed him, killing every inhabitant of resistant towns, even the cats and dogs. Generally regarded as barbarians by their enemies, the Mongol armies were in fact disciplined and effective.So how did Genghis create such an impressive fighting force? How did he draw together such diverse peoples to create a wealthy and successful Empire? And what was his legacy for the territories he conquered?With Peter Jackson, Professor of Medieval History at Keele University; Naomi Standen, Lecturer in Chinese History at Newcastle University;George Lane, Lecturer in History at the School of Oriental and African Studies