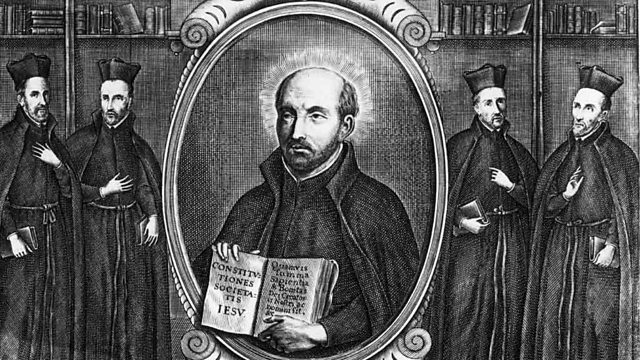 Melvyn Bragg discusses the Jesuits and their role in the education, art, politics and mythology of the Counter-Reformation.

Melvyn Bragg and guests discuss the Jesuits, a Catholic religious order of priests who became known as “the school masters of Europe”. Founded in the 16th century by the soldier Ignatius Loyola, they became a major force throughout the world, from China to South America. “Give us a boy and we will return you a man, a citizen of his country and a child of God”, they declared. By the 17th century there were more than 500 schools established across Europe. Their ideas about a standardised curriculum and teaching became the basis for many education systems today.They were also among the greatest patrons of art in early modern Europe, using murals and theatre to get their message across. To their enemies they were a sinister collective whose influence reached into the courts of kings. Their wealth and their adaptability to local customs abroad provoked suspicion, prompting their eventual suppression in the late 18th century. They were re-established in 1814 and now have more than twenty thousand members.So why was education so important to the Jesuit movement? How much influence did they really have in the courts and colonies of Europe? And were they really at the heart of conspiracies to murder kings?With Nigel Aston, Reader in Early Modern History at the University of Leicester; Simon Ditchfield, Reader in History at the University of York; Dame Olwen Hufton, Emeritus Fellow of Merton College, Oxford.