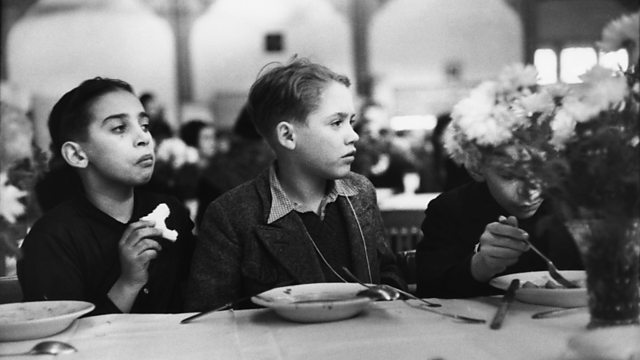 David Cesarani tells the story of how 10,000 unaccompanied children, most of them Jewish, escaped from Nazi Europe to Britain. Originally broadcast in 1999.

The story of the Kindertransport, told through the voices of the unaccompanied children sent to Britain from Nazi Europe.

In late 1938, the British government agreed to grant asylum to children from Germany, Austria and Czechoslovakia, as long as they came alone and would not be a burden on public funds. 10,000 arrived, most of them Jewish, and the BBC was there to record their stories. A team went to Dovercourt Camp in Kent and recorded the innocent, hopeful voices of the newly arrived children for "Children in Flight" a remarkable radio documentary. "We are all waiting to go to homes in England where we can stay till our parents will leave Germany," a girl called Kathe told the BBC team. "All the children hurry to see if there is a letter from home which tell them of their families," Irene said.

In 1999, historian David Cesarani went in search of these children for a Radio 4 documentary, to find out how they had adapted to life in Britain, and to the eventual realisation of the terrible fate of most of their parents. Few had understood what their departure from home really meant. "I thought it was a temporary thing, it was a temporary parting," Eva Urbach told Dr. Cesarani. "We did not realise the seriousness." With a new wave of refugees dominating the news, the story of the Kindertransport has again become a vital part of the national discussion. Radio 4 is repeating the 1999 broadcast to provide the human story of this tale of survival and heartbreak.

From the Self to the Selfie