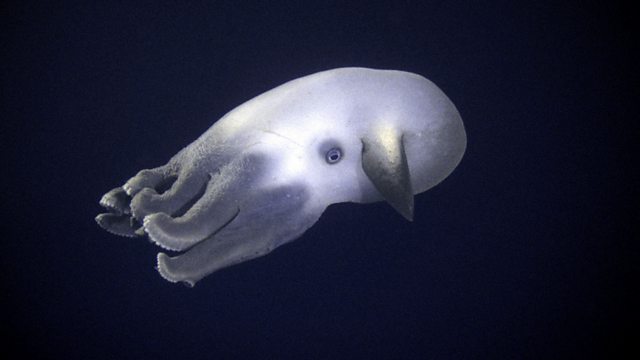 Series showing our planet in its natural glory. A look at the largest of all habitats, the ocean, which encompasses 90 per cent of all the living space on the planet.

David Attenborough narrates the final episode in the documentary series that shows our planet in all its glory. In this part, he looks at the largest of all habitats - the ocean. From the surface to the distant abyss, it encompasses 90 per cent of all the living space on our planet. Its depths plunge to over 11 kilometres down and it hides over 30,000 immense volcanic mountains, some far taller than Mount Everest. Much of this vastness is a virtual desert, but the creatures that do live here include the most bizarre, most powerful and most charismatic of all. It is the home of the greatest animal ever to have existed, the blue whale, twice the size of the largest known dinosaurs.

So, from the sinister 'vampire squid from hell' glowering in the depths, to the scintillating attacks of 100 sabre-billed sailfish speeding at the surface, explore the alien world of the open ocean in the safety of your living room.

See all clips from Ocean Deep (9)