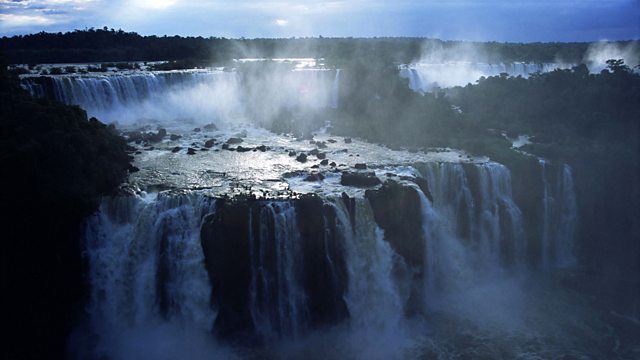 Documentary series which celebrates earth in all its glory. This edition follows the descent of the planet's mightiest rivers from their mountain sources to the sea.

This edition takes an epic river journey following the descent of the planet's mightiest rivers from their mountain sources to the sea. Breathtaking river scenery is revealed by a revolutionary helicopter camera mount - from the world's highest and broadest waterfalls to the awe-inspiring spectacle of the 10,000-strong flocks of greater snow geese in flight.

We witness underwater swimming monkeys, giant salamanders - at two metres the world's largest amphibian - on the hunt in a remote mountain river of Japan, and river dolphins in the Amazon, showing off lumps of rocks to win over a mate.

New underwater worlds are discovered - we break the ice of the world's deepest lake, Baikal in Siberia, home to the only freshwater seal and bizarre giant amphipods. We dive into the Pantanal, the world's largest wetland patrolled by caiman and piranhas.

We also encounter dramatic showdowns between gangs of Indian otters and mugger crocodiles. In Africa, the lightning ambushes of Nile crocodiles on wildebeest are filmed for the first time at ultra-high speed.

See all clips from Fresh Water (11)