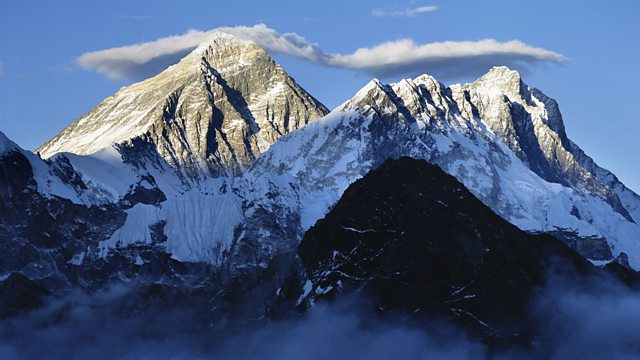 Documentary series which celebrates earth in all its glory. This edition looks at mountains, beginning with the birth of a mountain and ending at the summit of Everest.

Humans like to think that once they have climbed a mountain, they have somehow conquered it. But they can only ever be visitors to this alien, frozen world. Planet Earth takes you on a tour of its mightiest ranges, beginning with the birth of a mountain at one of the lowest places on earth, and ending at the summit of Everest. Unprecedented access brings you closer than ever before to the most awe-inspiring mountain landscapes on our planet and the secretive, almost mythical creatures that inhabit them - the 'real' mountaineers.

In Ethiopia, Planet Earth ventures into the heart of a volcano to discover one of earth's rarest phenomena - a lava lake that has been erupting for over 100 years. The same forces created Ethiopia's Simien Mountains, home to troops of gelada baboons nearly a thousand strong. In the Andes, a family of five puma struggle to survive the most unstable mountain weather on the planet.

Experience the full force of an avalanche in the Rockies, where grizzlies survive the harsh winters deep inside the dangerous slopes. In summer, the bears climb the peaks in search of moths, which they devour by the thousand.

Descend into the icy core of a glacier in the Alps and emerge in Pakistan, at the snout of the largest glacier on earth. This realm of giant peaks is home to the highest land predator on the planet - the snow leopard. Astounding images of a female snow leopard hunting to feed her cub are a world first.

Enter a mountain cave in China for the first ever glimpse of a wild giant panda mother nursing her week-old baby and fly alongside demoiselle cranes as they attempt to cross the largest range on our planet, the Himalayas. The cranes, like all visitors to the hostile world of the high mountains, dare not linger.

From Pole to Pole

See all clips from Mountains (12)