Master of dark arts: Why Caravaggio casts a long shadow

Boastful, drunken, dissolute, and murderous: the painter Caravaggio lived a scandalous life but was the most celebrated and notorious artist of his day. His bold work, full of shadows and drama, pushed art in a new direction and won him plenty of admirers long after his short, violent life ended. WILLIAM COOK visits Beyond Caravaggio at the National Gallery to revel in the work and legacy of a true original. 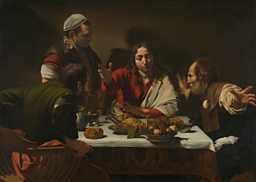 Michelangelo Merisi da Caravaggio was the bad boy of Renaissance art. He was arrested countless times, for brawling and whoring. He spent his last few years on the run, wanted for murder (the man he killed – stabbed in the groin - may well have been a rival pimp). He poured the violence of his life into his art, yet his paintings are full of tenderness.

It’s that combination of fury and compassion which makes him such a thrilling artist. That’s why his paintings seem so modern, over 400 years since he died.

He could capture the key moment in any story. You can see why film directors like Martin Scorsese admire him

Beyond Caravaggio is a fine show, but first a word of warning: there are only six Caravaggios here, three from the National Gallery’s own collection. This isn’t a retrospective, it’s mainly about the painters he inspired. Caravaggio made his name in Rome, a city swarming with artists. After he fled, to escape that murder charge, many of them carried on where he left off.

Caravaggio is renowned for his intense use of light and shadow (chiaroscuro is the posh term for it) but it’s his dramatic storytelling which really changed the course of art. He could capture the key moment in any story. You can see why film directors like Martin Scorsese admire him. You can see his influence in films like Mean Streets, and The Last Temptation of Christ.

Beyond Caravaggio doesn’t bother with contemporary disciples like Scorsese. Its focus is painters working in the 17th Century, after Caravaggio died. For the last ten years of his life, Caravaggio was famous. Like a rebellious rock star, his untimely death made him even more famous than before. For half a century, countless artists tried to paint like him. Then his gutsy realism fell out of fashion, and this style of painting disappeared.

For several centuries, Caravaggio shrank into obscurity. It was only during the 20th Century that his reputation was restored. Picasso sang his praises; it’s easy to understand why realistic filmmakers like Pasolini revered him. His saints are dirty and dishevelled, his villains are victims. He wasn’t interested in artifice - his only aim was to paint the truth.

A handful of Caravaggios ended up in British collections, alongside lots of paintings by his acolytes – many of them wrongly attributed to Caravaggio (The Incredulity of Saint Thomas by Spadarino still bears his name upon the frame).

Caravaggio’s murder rap was an accident waiting to happen. If anything, it was a wonder it hadn’t happened years before

It’s great to see them all together. It makes you realise how important Caravaggio was, and why so many artists tried to imitate him. None of them quite matched him, but a few came fairly close.

A lot of these artists knew Caravaggio well. Cecco was Caravaggio’s servant and his model (and possibly his lover). Spadarino was a close friend – his paintings share Caravaggio’s sense of drama, his cinematic use of light.

Of all these imitators, the most intriguing is Giovanni Baglione, Caravaggio’s first biographer. Baglione was a fan at first (his Ecstasy of Saint Francis is clearly influenced by Caravaggio) but he soon turned against his hero.

The story of their feud provides a vivid portrait of Caravaggio’s fiery character, a fire which lit up his paintings and wreaked havoc in his life.

Baglione was far more conventional than Caravaggio, and initially more successful. Caravaggio was fiercely jealous of other artists, particularly hacks like Baglione who knew how to please rich patrons.

Caravaggio badmouthed Baglione all over town; Baglione sued for libel. Caravaggio stood trial, bluffed it out, and somehow wriggled free. Baglione accused Caravaggio of sodomy - a capital offence. He claimed Caravaggio tried to murder him (from what we know of Caravaggio, this doesn’t seem so far-fetched).

Caravaggio’s murder rap was an accident waiting to happen. If anything, it was a wonder it hadn’t happened years before.

He fled from Rome to Naples, then on to Malta and Sicily. His art became darker and more introspective. Eventually, his enemies caught up with him and left him horribly mutilated. He died, still on the run, aged just 38.

Yet the paintings he left behind in Rome spread the word about his genius. Foreign artists came to Rome and took his influence back home with them: Ribera back to Spain; Rubens back to Flanders… Velázquez and Rembrandt both owe him a huge debt.

That Caravaggio acquired so many followers is a testament to his immense talent. He had no studio, he had no pupils - he was contemptuous of other painters. He threatened to beat up other artists who he thought had ripped him off.

‘Michelangelo Merisi was a satirical and proud man,’ wrote Baglione. ‘He would speak badly of the painters of the past, and also the present, no matter how distinguished they were, because he thought that he alone had surpassed all other artists.’

Michelangelo Merisi da Caravaggio was right. There was no other artist like him, and Beyond Caravaggio bears this out. The other painters in this show are interesting, but they pale beside Caravaggio.

To see his Supper at Emmaus beside The Taking of Christ is like reuniting the twin halves of a lost diptych. His brooding Saint John the Baptist (on loan from Kansas) is worth the admission price alone. As for all the others? Well, their paintings are like good cover versions, like The Doors without Jim Morrison – well worth seeing, but nothing like the real thing. 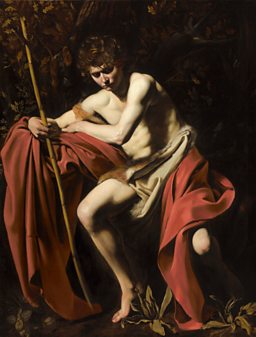 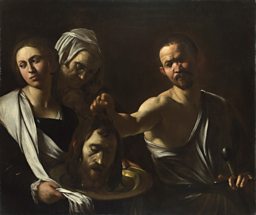 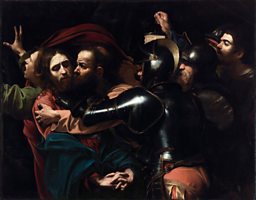 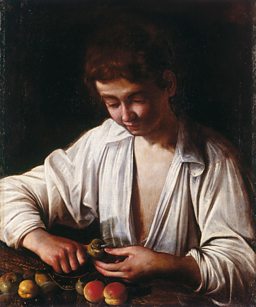 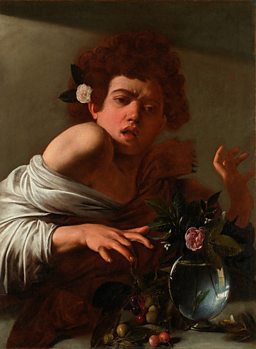 Boy bitten by a Lizard, About 1594-5, Michelangelo Merisi da Caravaggio, © The National Gallery. 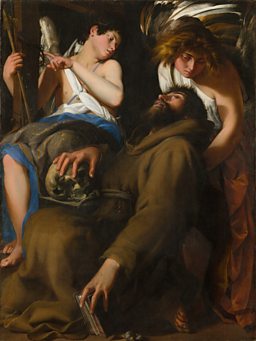 The Ecstasy of Saint Francis, 1601, Giovanni Baglione. © The Art Institute of Chicago. 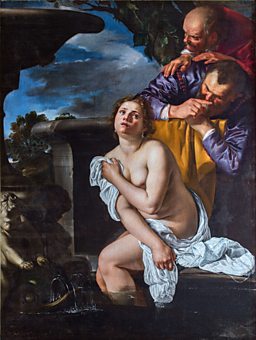 Susannah and the Elders, 1622, Artemisia Gentileschi. © The Burghley House Collection. 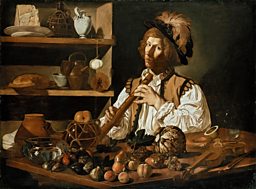 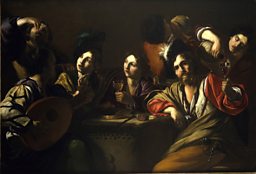 A Drinking and Musical Party, 1615-20, Bartolomeo Manfredi. © Courtesy of Robilant and Voena.

Trailer: Beyond Caravaggio at the National Gallery

National Gallery YouTube trailer for the Beyond Caravaggio exhbition 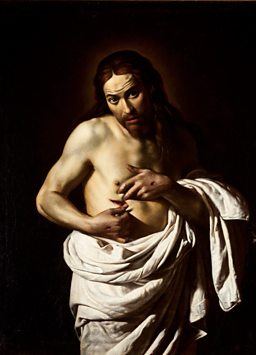 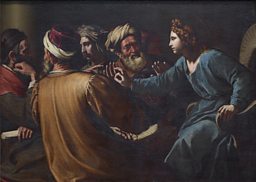 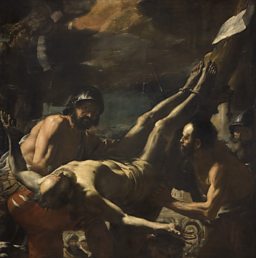 The Crucifixion of Saint Peter, about 1656-9, Mattia Preti (called II Calabrese), © The Barber Institute of Fine Arts, University of Birmingham. 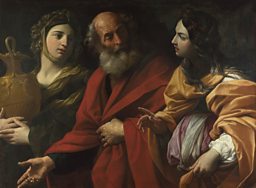 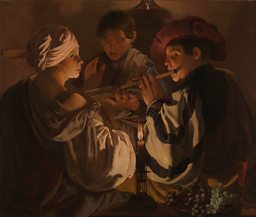 The Concert, about 1626, Hendrick ter Brugghen. © The National Gallery.

The Beyond Caravaggio exhibition is at the National Gallery, London from 12 October 2016 to 15 January 2017.