Super Mario 3D World + Bowser’s Fury is a port of the 2013 Nintendo Wii U game. Unlike most Wii U ports, this game has a considerable amount of changes and added content, including the brand new Bowser’s Fury mode. But how well does it hold up? 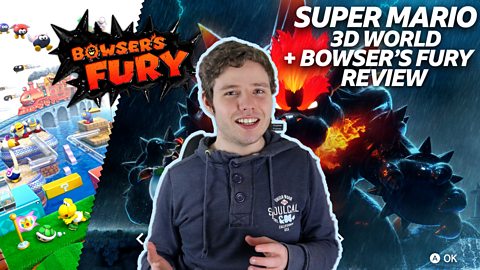 Nintendo are back with another Wii U port, how does it hold up in 2021?

In this latest Mario installment, you can control one of four uniquely talented characters: Mario, Luigi, Peach or Toad. 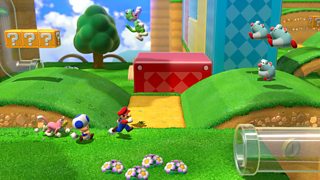 Mario is an all-rounder, Luigi can jump high, Peach can briefly float in the air and Toad is extremely fast.

There’s even an unlockable fifth character but I won’t spoil that surprise.

It’s fun to mess around with the playing styles but, at times, it feels like there’s an imbalance between the characters.

For example, Toad is really fast but his jump is incredibly nerfed. This is especially noticeable during multiplayer when the character puts you at a huge disadvantage.

Despite character issues, the online multiplayer works surprisingly well. I only encountered the occasional stutter, even when I had a full party of four playing the game. It’s fun, chaotic and exactly what the Switch was made for.

The main headline is the new cat suit which enables Mario and friends to climb up walls or swipe away enemies.

The levels are linear obstacle courses in which the goal is to reach a flagpole at the end of each stage. Although they’re incredibly short, the stages are so well designed that it never bothered me. Not only that, the amount of levels is staggering.

Helping to make these stages even fresher are the new power-ups featured in the game. The main headline is the new cat suit which enables Mario and friends to climb up walls or swipe away enemies. The Double Cherry power up allows you to clone copies of your character for some extremely frantic gameplay. These creative add-ons are some of the strongest to be featured in any Mario game.

You can also find hidden collectibles within each level. There are green stars that open up new stages and stamps that can be used in the new snapshot mode. The latter enables you to pause the game and make impressive looking photos to share. While the feature is a cool idea on paper, in execution it’s really nothing to get excited over. The camera is locked depending on what part of the stage you’re on, limiting immensely how good of a shot you can actually capture. It’s even locked off entirely in multiplayer, which is a shame considering how cool it would’ve been to strike a pose with your friends to create some unique looking photos.

This mode is the complete opposite of 3D World. It’s a single-player experience with a huge, open world to explore. Bowser’s Fury is structured more like Super Mario Odyssey where you search the world for Cat Shines, the new collectibles of the game.

By far the most exciting feature of this mode is the inclusion of Fury Bowser. This is the biggest we’ve ever seen Bowser and he’s the entire focus behind this new mode. During certain intervals, Bowser will emerge from the sea to wreak havoc upon the world. He will throw down blocks or breath fire at the player. What’s even cooler is the new power-up of this mode, the Giga Bell. When it is unlocked, after collecting a certain number of Cat Shines, Mario will turn gargantuan, empowering him to fight Bowser. With each battle, new areas of the map will open, allowing Mario to collect even more Cat Shines and fight Bowser once again. It’s unlike anything Nintendo has ever tried and I hope this weird, experimental side of this gaming giant carries on into future Mario titles.

However, there are some glaring problems with this mode. Firstly, it’s far too short. It’s marketed as a complete new game but it really isn’t. It can be completed within 5 hours. Also, some of the Cat Shines can feel repetitive as the mission structures are sometimes very similar. Finally, Mario’s lack of moves, such as the triple jump, can sometimes make traversing the huge map feel a bit tedious.

Even with all these minor flaws, I enjoyed Bowser’s Fury a lot more than I thought I would. The platforming was fun, exploring the open world was engaging and seeing Bowser at such a huge size was entertaining.

Overall, I would highly recommend playing this game. There’s just too much fun to be had to miss it. Bowser’s Fury and the online multiplayer are the two biggest highlights here and make this game a worthy addition to anybody’s Switch library.