Which is better – running on a treadmill or outdoors?

To pound the pavements or to toil on the treadmill? Is there really any difference aside from climate? 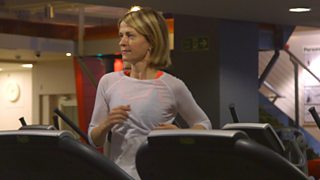 In many ways the answer will depend on why you’re running in the first place – are you looking to improve overall fitness, burn calories, or train for an event? Both outdoor and treadmill running can help to achieve these goals, but there are also some general differences to be aware of.

Running outside is harder work and burns more calories than running at the same speed on a treadmill, largely because of wind resistance. However, as a study conducted by Prof Andrew Jones and the University of Exeter showed, this imbalance can be easily corrected in the gym. All you have to do is set your treadmill to a 1% gradient, or 2% if you’re an elite athlete.

It’s worth knowing that when we run on a treadmill we tend to overestimate our pace. A study conducted in 2012 which asked participants to run outdoors and then match their speed on a treadmill found that the treadmill speeds were significantly slower. The scientists behind the study proposed that this error in perception could be due to the difference between what we expect to see and what we actually see when running on a treadmill. Whatever the cause, it suggests that when we run outside we work harder without even realising it.

Running on a treadmill comes with fewer hazards – you don’t have to weave around obstructions and you can run uninterrupted for a much longer time. You’re also safe from uneven surfaces and your landing is softened by the conveyor. However the repetition involved could be a problem. When we run our feet hit the ground about 1000 times per mile and when the same motion occurs again and again it can cause an overuse injury. To avoid this, it’s a good idea to vary both the speed and the incline when running on a treadmill. Outside, this is less of a problem, especially if you run off road. In fact running on varied terrain can activate more muscles, strengthen ligaments and improve balance.

Several studies have shown that exercising in natural environments, particularly in green space, can help us feel more energetic and positive and can even combat depression. A few have also found that outdoor exercise can lower the levels of cortisol in the blood, a hormone related to stress.

So while there are pros and cons on both sides, running outdoors probably edges it. But the best advice, especially if you’re starting out, is to pick the kind of running that you enjoy the most and that you’re most likely to stick to. And if that means heading to the nearest treadmill just remember to vary the speed and the incline.