Birds of prey are the planet’s top aerial predators.

They have a ratchet mechanism in the tendons of their toes. This means they can close their feet tight to carry prey long distances without having to sap the energy of their muscles.

Their extraordinary eyesight can keep three different fields of view in focus at any one time.

Falcons are a genetically distinct group and are more closely related to parrots than the other birds of prey.

The peregrine falcon is the fastest animal on Earth with a top speed of over 200mph (320kmh). It reaches these speeds by flying high into the sky and then going into a dive, or stoop, to attack prey from above. During a stoop its wings are drawn closer and closer to its body as speed increases, to reduce drag. But reducing drag isn’t just that simple. Smooth surfaces can generate more drag than uneven ones, which is why a golf ball has dimples. As air moves over the peregrine’s smooth wing any areas of excess drag are combated by individual feathers popping up in the exact location of the problem. These feathers become, what is known in aerodynamics as vortex generators. These vortex generators reduce drag and keep the peregrine accelerating when most birds would be left behind 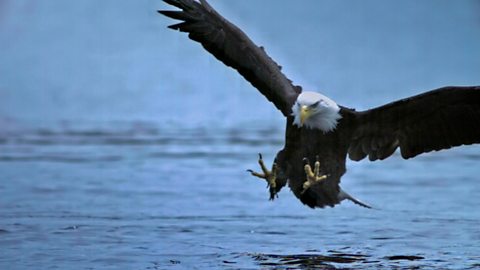 The deadly grip of birds of prey

The key to the success in hunting lies in a birds tendons and talons.