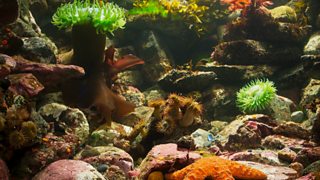 The Pacific North West is home to some of the most productive coastline in the world – here are the Amazon rainforests of rock pools, bursting with life. But it would be almost impossible to film the lives of these creatures in detailed time-lapse in the tempestuous but confined world of the rock pool without our camera heavy equipment squashing our stars. For their safety and ours, we had to relocate to a nearby science facility, at Bamfield Marine Sciences Centre on Vancouver Island - located only a literal stone’s throw from the ocean and with a fresh supply of seawater and expert marine scientists on hand. Here, we would reconstruct our own laboratory-based rock pools.

With the help of the scientists who study them, and our rugged Canadian field assistant Chad Tamis,the invertebrates, small fish and even rocks were all collected (and returned to the exact same locations after filming). This allowed us to recreate the natural environment with great accuracy, so what you see is true to nature. Fresh seawater was piped in from the shore a few hundred meters away. Well used to the tough and changing tidal conditions, these species immediately settled in to their temporary home and continued to display their natural behaviour. But even then, filming would not be easy. 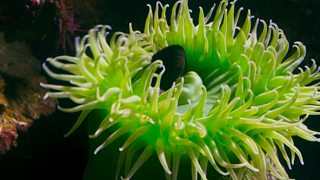 Away from the dangers of slippery rocks and the fast-rising tide, we were able to observe our critters for the entire days and ultimately weeks that it took to capture their natural behaviour before they were returned back to the shore. Lots of fascinating things happen in a rock pool, it just doesn’t happen on our time scale. The key to revealing this alien world was speeding it up through time-lapse photography. And the key to filming it was a lot of patience. Whilst some of our colleagues were out on the ocean, filming sharks and sperm whales, Rod, Chad and I could spend hours watching a starfish climb over a rock. But by distilling 3 weeks work in a 5 minute sequence we could safely show the dramatic life and death struggles of the rock pool, like never before.