Over a game of golf, scientists Jerry Ault and Nick Shay made an amazing discovery that could change the way we predict hurricanes in the future. Professor Ault was conducting research into the movements of marine fish around the Gulf coast in the Atlantic Ocean, including hammerhead, bull and tiger sharks. The satellite tags also recorded water temperature and depth as the sharks moved around the ocean. He found an interesting pattern in their behaviour – as the sharks migrated they followed a layer of water, called an isotherm, at 26 degrees celsius.

The eureka moment came when discussing his findings with friend and colleague, Nick Shay, who is a Professor in ocean sciences. Shay recognised that the temperature the sharks were following – 26 degrees Celsius – as the minimum temperature a tropical storm needs to form. Seawater that is warmer than this is full of heat energy that a storm can use to form.

By combining their research, they were able to create a real-time temperature map of the ocean. The information from the sharks movements could pinpoint hot spots of warm water that would be a good indication of where a storm would likely form. Not only that, but they would also be able to help predict the likelihood of the storm turning into a hurricane, the size of the hurricane and the path it might take towards land! 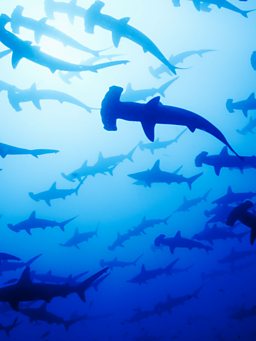