The making of...Kill The Christians 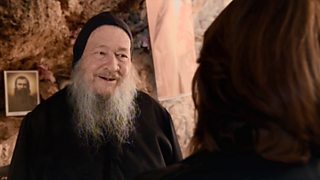 I had just landed at Rome’s Fiumicino airport en route to film at the monastery of Monte Cassino when I received a phone call. The Series Producer of BBC2’s ‘This World’ was on the line. “Would you be available to make a programme about Christians under threat in the Middle East in Syria, Iraq and Lebanon?” I instinctively said yes but the next morning, as I filmed a dramatic sunrise over the world famous Monte Cassino Abbey, I started to have my doubts. Not another trip to Syria, I despaired, particularly so soon after a three-month trip earlier in the year when a mortar attack destroyed our vehicles. I’m getting older, I admitted to myself, I’m more wary of war zones, surely the BBC could send me somewhere less dangerous? But as I wandered through Monte Cassino’s cloistered courtyards, I considered how, in an increasingly secular Europe, we have lost touch with the roots of the religion that shaped the culture and history of the Western world. The story of the decline of Christianity in the Middle East was really important to tell, especially now with the rise of the so-called Islamic State - IS.

A few months later, I arrived in Iraq laden with the usual trepidation that can niggle when returning to a hostile environment after a period in more tranquil places. As I crossed the hotel lobby in Erbil, the capital of the Iraqi autonomous region of Kurdistan, apprehension transformed to bemusement as I saw Boris Johnson, London’s mayor, bouncing towards me followed shortly afterwards by some fifty Brits in kilts and black tie who were off to celebrate Burns Night.

Reality kicked in the following morning. A few kilometers from the frontline, fighting was visible between Kurdish Peshmerga forces and those of IS. There were large explosions as jets from the United States and various European air forces dropped bombs on IS positions. Within sight of this scene of extreme violence, we got to work filming in a spectacular fourth century Syriac Orthodox monastery surrounded by priests in extraordinary vestments in a place where Christianity had been practiced for sixteen hundred years in a time when the majority of the population was Christian. Father Yusuf, a dedicated follower of Spanish football’s La Liga, was our friendly guide.

The sounds of battle were soon replaced by the beautiful chanting of the monks in Syriac, an ancient language close to that spoken by Christ. As the clergy processed and incense wafted across the church and over its small remaining congregation, I thought about the narrow escape these monks and their monastery had had. Last summer, IS fighters reached the foot of the mountain below the monastery during their advance across the Nineveh Plain. Not far away, another stunning 4th century monastery, Mar Behnam, had been taken over by IS militants. It was blown up and destroyed whilst we were filming ‘Kill the Christians’. The Christian population around Mar Behnam was offered choices by the leaders of the so-called Islamic State: conversion to Islam or the dhimma contract - involving payment of jizya tax. Ominously, the IS statement continued, “if they refuse this they will have nothing but the sword.”

As we filmed more with Christians who had fled IS, a disappearing world revealed itself to us. I realized that my many trips to the Middle East making documentaries for the BBC had not brought me into contact with the region’s ancient Christian communities and that there was so much to learn and understand.

The next challenges was to capture the beauty and atmosphere of the Qadisha Valley, the heartland of the Lebanon’s Maronite Christians, where we wanted to film with a hermit who lived in a remote cave. For well over a thousand years Maronite hermits have lived in this extraordinary valley in the Lebanon’s northeast. There used to be a great number of them but only three continue the tradition today. Our Maronite priest guide warned us that the hermits were not media friendly and that we had to arrive at the right moment as the hermits prayed alone for fourteen hours a day.

We set out on a trek, descending a nerve janglingly steep path adjacent to precipitous drops below snow-capped peaks towards a hermit’s cave. The final approach took us onto a ledge and from there through a door in the rock into a spectacular cave church. Then the good news: Father Dario, who was in his ‘eighties, was willing to be filmed. Extraordinarily, he turned out to be a supporter of Liverpool Football Club and had lived in Brighton. I filled him in on Liverpool’s performances over the previous decade, as religious cave life provides no television, newspapers or radio.

It was getting late and we still had to trek carrying all the camera kit out of the valley. Father Dario, wearing his hair shirt, bid us goodbye from the tiny cell in a part of the cave that he sleeps in. A rock for a pillow lay at the top of a blanket that formed his bed. As we walked down the Holy Valley at sunset, I wondered how long Christianity would be able to survive in the face of persecution and war in its ancient heartland.