Is olive oil really good for me?

Olive oil has long been suspected to be one of the keys to the so-called ‘French paradox’. 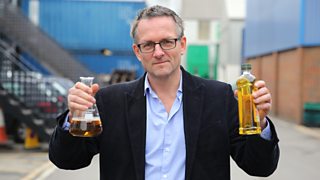 Despite the fact that the French smoke more than us, and eat the same high levels of saturated fat, they live longer than us and have low levels of coronary heart disease.

The ‘Mediterranean Diet’ is one popular explanation – and one part of that is a lot of olive oil.

Olive oil is often sold as ‘extra virgin’, which is unprocessed oil from the olive, and contains many more chemicals associated with the plant such as polyphenols.

These are thought to be potentially good for us, and so ‘extra virgin’ olive oil has often been said to be better for our health than ‘virgin’ (also mechanically extracted) or ‘refined’ olive oil (chemically processed) where more of these chemicals have been removed by processing.

How to measure changes in heart health

One of the big problems in trying to pin down particular factors that influence diseases like heart disease is that they take years, or decades, to develop and so it is difficult to do an experiment in which you give one group of people a food and deprive another group and measure the effects. Studies instead tend to be either looking for associations between health outcomes and certain habitual diets (in which case it’s difficult to separate out the effects of individual components of the diet), or looking at things that change more quickly – such as cholesterol levels – which are themselves thought to be associated with disease.

However, a team at the University of Glasgow have developed a new way of measuring subtle changes in heart health that can happen over only a few weeks, by looking at changes in the patterns of proteins excreted in peoples’ urine: a technique known as proteomics. The changes they are measuring are of the disease itself, which they can pick up before there are any physical symptoms — so it is far more accurate a method than measuring something that is just supposed to be associated with the disease, such as cholesterol levels.

Drs Bill Mullen and Emilie Combet Aspray recruited 70 volunteers, who all donated a sample of urine. They were then split into two groups – one group were given a supply of extra virgin olive oil, and one group ‘normal’ olive oil. Neither they, nor the research team, knew which oil they were being given. Each person had to take 20ml of olive oil a day (about 2 dessert spoons full) raw.

It is very important that the oil was taken uncooked. Cooking with oils changes their composition dramatically. Firstly, the polyphenols and other plant chemicals break down when they are heated, along with some of the ‘free fatty acids’. This point is called the ‘smoke point’ of an oil (and for extra virgin olive oil it is low, because of all the polyphenols and other plant chemicals). However, heating also breaks down the fatty acids that make up the oil itself, forming harmful chemicals. See Which oils are best to cook with? for full details.

The average measure of coronary artery disease for both groups fell significantly at both 3 weeks, and again at 6 weeks after taking the olive oil. 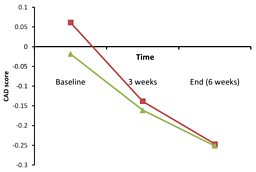 The fall in heart disease markers seen in volunteers taking extra virgin olive oil (red) and ‘normal’ olive oil (green) over 6 weeks. (The CAD score is a score of coronary artery disease where -1 is completely healthy and 1 is symptomatic disease)

In this experiment, it seems that taking 20ml of raw olive oil – either extra virgin or ‘normal’ – can have a positive effect on our hearts.

Because both extra virgin and ‘normal’ olive oil appeared to have exactly the effect, it seems that it is not the extra plant chemicals in extra virgin that are having the beneficial effect – instead it seems to be something about the oil itself – either the balance of monounsaturates, polyunsaturates and saturates, or perhaps its omega 3 and omega 6 oil content.

Because oil is very calorific, it’s best if this can be used as a replacement for another fat that you would normally have – for example dipping bread in olive oil rather than having butter on it.

Other suggestions for how to incorporate it into your meals is adding it to cooked pasta, using it on salad, or even mixing it into porridge!