Yesterday's tomorrow: The art of 2001: A Space Odyssey

Stanley Kubrick’s masterpiece 2001: A Space Odyssey, which airs on BBC Two on Saturday 27 April, defined the visual language of sci-fi for a generation. A book by Christopher Frayling shines a light on the unsung hero behind the film's extraordinary depiction of space travel: German artist, and sometime NASA futurologist, Harry Lange.

Left: Harry Lange's designs for spacesuits for Kubrick's 2001: A Space Odyssey, images courtesy of Harry Lange Archive/The Boynett Collection. Right: a still from the film featuring Keir Dullea in one of the film's suits, © 2014 Warner Bros. All rights reserved.

If any man could claim to have imagined the future it would probably be Harry Lange. Before a long career as an art designer in the film industry, Lange worked as an illustrator for America’s space rocket pioneer, Wernher von Braun.

This experience of imagining future science brought Lange to the attention of film-maker Stanley Kubrick. The director, after the success of his Dr Strangelove film, was planning a new film in collaboration with science fiction author, Arthur C Clarke.

Kubrick and Clarke wanted to avoid the tacky Hollywood B movie style of space opera characterised by the likes of Buck Rogers and Flash Gordon. They wanted a serious film that painted a realistic and scientifically accurate vision of space travel.

Lange recalled: "You see, this film was generally not called a science-fiction film, it was called a science-fact film, because we totally – virtually totally – projected space travel to the year 2001, and this nobody had ever done before. The War of the Worlds envisioned it with wonderful creatures, a pure fantasy, and we stayed totally away from all that."

With his NASA experience, Lange was the perfect man for the job. However, he admitted that Kubrick was somewhat blunt in his appraisal of his talents: “He said, 'Well, I can get better illustrations in New York city a dime a dozen, but they don’t have your NASA background... You’ve been around rockets of all shapes and sizes - you know what they look like'."

The project they planned together would ultimately become 2001: A Space Odyssey - the film that would indelibly inform how later generations would imagine what future space travel would look like. The strength and longevity of Lange’s legacy is evident in virtually every subsequent film that aims to capture space travel.

From Star Wars (Lange worked as art director on two of the original George Lucas films) through to the Alien films, Christopher Nolan’s Interstellar and Ridley Scott’s The Martian, Lange’s cold, minimalist, and scientifically-sound aesthetic has become the film industry’s lingua franca for depicting space travel and futurism.

The 2001 File: Harry Lange and the Design of the Landmark Science Fiction Film is published by Reel Art Press. The BFI's Kubrick season runs throughout April and May 2019, and Stanley Kubrick: The Exhibition is at the Design Museum from 26 April - 15 September 2019.

A version of this article was originally published on 14 December 2015. 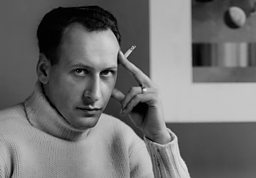