Working with the rescue chimps so closely was a huge privilege our crew won’t soon forget. So what’s it like to work with these charismatic and cheeky characters?

I know you’re not supposed to have favourites, but I really fell for two-year olds Bui and Gola. 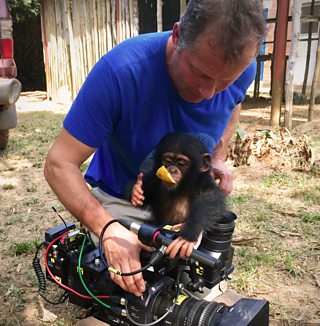 Going back several times over eighteen months we really got to know them as individuals, and it was very moving to see them gradually healing from their trauma and growing up in a safe environment amongst other chimps.

The orphans are highly curious and love shiny new toys to play with so we became a new form of enrichment for them, and as a result the equipment took quite a hammering.

We had to include a new budget-line for ‘chimp damage’ at a thousand pounds per shoot. Radio mics were the biggest casualties, with the wires ripped to shreds. Whilst filming, it wasn’t unusual to have one chimp climbing up my leg, another on top of my head doing some grooming and a third, usually Max, waiting to leap on top of the camera as soon as my back was turned.

Spending so much time in such close proximity to a family of chimps was immensely rewarding and something I’ll always remember. We filmed them as little babies at their very sweetest, but it’s scary to think they will live for another sixty or seventy years and need looking after round the clock.

I have enormous respect and admiration for the team in Liberia who’ve dedicated their lives to caring for the chimps, and just hope they’re able to to keep going and give the orphans the best lives they possibly can.

Having the opportunity to work so closely with our nearest living relatives was a truly wonderful experience and one I have always treasured since I started working with the great apes, but there’s always the bitter-sweet feeling that we should never be this close to these amazing beings because they simply shouldn’t be in these sanctuaries.

we should never be this close to these amazing beings

They belong in the wild.

Behind every cuddle was always a desperate orphan who should be in his or her mother’s arms, behind every fun encounter with me was the reminder that they should be playing in the forests with their own kind.

It’s all too easy to imagine how cool it might be to own one or play with one but I think I speak for everyone who has ever worked with sanctuary primates in saying that my greatest wish for them would be that we never had to meet in the first place.

Total chaos! Spending even an hour with these chimps is fascinating, joyful, exhausting – and occasionally painful. When you see their personalities emerge and their sense of humor, or when one comes to you for comfort it’s a magical feeling. But also a conflicting one – they deserve to be in the forest with their moms and not with us.

Spending even an hour with these chimps is fascinating, joyful, exhausting – and occasionally painful.

What surprised me most, apart from their individual personalities, was how often they outwitted us. They are both strategic and single-minded when they want something, pretending to be occupied and waiting until the second you turn your back to drop down on your head or grab your gear. With the boom pole, the cables and the big fluffy microphone cover I always imagined I looked like a really fun light-up tree with vines.

It was one the most challenging but fun shoots I’ve ever been on. Being followed by the little chimps whilst using a camera made getting any shot hard; when I thought all was going well, they would then turn toward me and try to reach my camera... for them it was a cool toy. I got my connection cables pulled and snapped all the time.

It was one the most challenging but fun shoots I’ve ever been on.

Being rigged up to the Ronin steadycam in 30 degree heat and extreme humidity was it’s own challenge; I was dripping pretty much all the time. I went through all my t-shirts and even had to borrow one at the sanctuary just so I could keep up. But I loved filming the chimps and every second I had with them. I didn’t want the shoot to end.

As I got out of the van to meet the chimps, my heart was pounding with excitement. 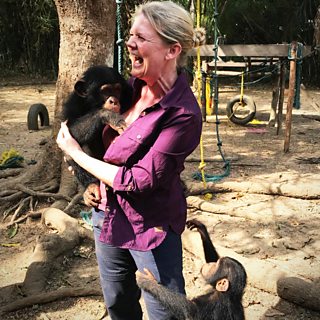 Over the past year, I’d heard so much about the different characters but nothing could prepare me for how vibrant, fun and cheeky they were.

Each chimp’s personality is so different and watching them jumping around so happily, trying out the skills they’d learned was so incredibly heart-warming.

Filming with the orphan chimps in Liberia was the most life affirming and heartbreaking of experiences. 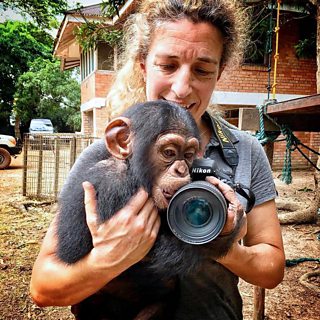 After 3 days in quarantine we were able to meet the baby chimps for the first time. They were timid, we were new.

In their short lives, humans had shot their mother, ripped them away from the forest home they were born into and sold them into the pet trade.

Why should they trust anyone?

I sat quietly, waited patiently for their approach.

Curious and bolder than the rest, one ambled over, reaching up with tiny skinny arms, he climbed into my lap, smelt me and slipped his hands around me and lent his head into my shoulder for a hug.

I felt honoured and it gave me hope that with the devotion of the Liberia Chimpanzee Rescue and Protection team these little chimps could look forward to a brighter future.