Summary: Bodhi Day marks the moment 2,500 years ago at which Siddhartha Gautama attained enlightenment, becoming the Buddha or 'awakened one'. Rejecting the life of a prince, Siddhartha spent years as a poor holy person. At last he gained the insight that Buddhists say allowed him to make sense of death and suffering and to transcend them. Bodhi Day falls on the 8th day of the 12th lunar month of the Chinese calendar. In Japan and many other parts of the world, it is celebrated on the 8th December. 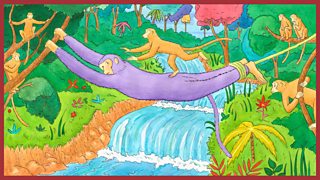 ...the king of the humans was moved by what he saw.

Deep in the forest grows a wonderful mango tree, tended by monkeys. Their king tells them to pick the fruit and keep it safe from greedy people. But the juiciest mango falls into the river and floats down to the Land of the Humans, where the Human King tastes it...and immediately wants more. He leads his army to the tree and claims it for himself, ordering his soldiers to kill the monkeys. The Monkey King makes a bridge from his own body, so the monkeys can escape. Sadly, the effort is too much for him and he dies. The Human King is moved by the Monkey King's sacrifice and learns the value of kindness.

End of speech: '...and later, a golden temple was built in his memory.'