Tshivanga, Kahuzi-Biega National Park in eastern Democratic Republic of Congo. It’s 7a.m., and I am standing high up in the hills on the edge of a vast, magnificent area of tropical forest. 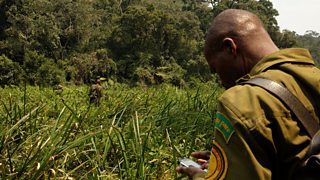 Standing beside me is chief gorilla habituation officer Robert Mulimbi. For the last 8 months, Robert and his men have been tracking and recording the movement of Mpungwe on a daily basis.

Mpungwe is an unhabituated Grauer’s gorilla Silverback; he lives with the dozen or so members of his family in the upland sector of the park.

A few steps into this mysterious world, and I quickly realise I will have to put my full trust in Robert and his team.

To take us through the entangled forest and find the gorillas requires a lot of machete waving, a regular noise I will quickly get used to, as without it we would hardly be able to move our awkward bodies into the jungle.

Half-eaten bamboo shoots, bent vegetation, faeces on the ground, any signs will just get us closer to them. After a few hours’ walking up and down, crossing streams, going back on our steps, and climbing yet more steep hills, we finally reach the nests which each of the gorillas made for themselves the night before. This tells us we are close. More tracking, following tell-tale gorilla signs, and suddenly we find ourselves face to face with Mpungwe, who appears silently, as if from nowhere. He is huge, and immensely powerful. Yet even though he could easily kill me, it is his gentleness that strikes me. His demeanour speaks of a sensitive, even inquisitive soul.

There is a sense of serenity and tranquillity, almost surreal, it’s so quiet.
Julie Moniere

On the ground, up in the trees, the females and their young, the sub-adults and juvenile gorillas are all spread around him, eating peacefully. Gorillas do a lot of eating. They don’t even notice us. There is a sense of serenity and tranquillity, almost surreal, it’s so quiet.

It’s time for me to grab my tripod. As soon as I set it down in the thick vegetation, Mpungwe disappears. After a few attempts, I realise that this alien object is making him uncomfortable. How am I going to gain his trust? I decide to film the females around him instead, as they don’t seem to be bothered by me, or by my equipment. Tomorrow I will try to film him again.

Tomorrow comes, and after a few attempts, eventually he accepts the tripod. But as soon as I attach the camera, he disappears again! We need to come up with a plan if I don’t want to come back just with footage of Mpungwe’s bottom, as he walks away from me.

Next morning, Robert comes up with the solution. I set up the camera behind bushes, out of Mpungwe’s sight. Robert and two of his trackers stand side by side, forming a wall. I slowly hide behind them and set the tripod up. When I’m ready, they move to the side. It works, Mpungwe is less anxious! Slowly, he relaxes around me. 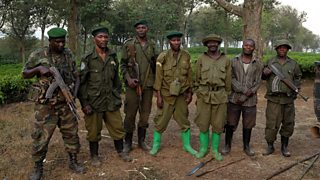 after a few days it’s time for me to leave him and his family, and they disappear into the forest as quickly and silently as they first appeared

But there’s a final stage - to get him as relaxed as possible, I need to ask the trackers to stop using the machete to clear the view. When tourists come to see gorillas, they want a clean shot, but with filming, we want to show them in their natural environment. Eventually I’m able to film Mpungwe for longer periods. I wish I’d had even longer with this wonderful wild gorilla - but after a few days it’s time for me to leave him and his family, and they disappear into the forest as quickly and silently as they first appeared. 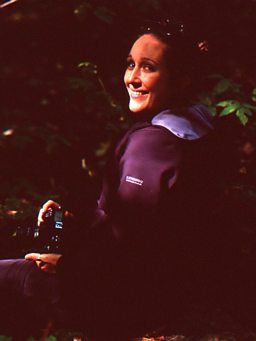 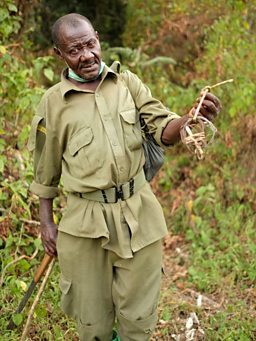 Tracker Ba'kongo with a snare