8 amazing facts about the history of Christmas

Many of the UK’s best-loved Christmas traditions first became popular in the Victorian era. In a special edition of the You’re Dead To Me podcast, Greg Jenner is joined by historian Dr Fern Riddell and comedian Russell Kane to discuss the 19th-century festive customs that are still central to our seasonal celebrations today – from crackers to Christmas cards. Here are eight of the most surprising things we learned... 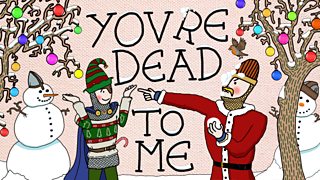 A 19th-Century engraving of a boy and girl pulling a Christmas cracker.

1. The first Christmas crackers were known as ‘Bangs of Expectation’

Crackers came about because confectioner Tom Smith needed a way to market French-style sweets wrapped in paper. The story goes that he was inspired to add an explosive element by the sight of a log crackling on the fire. But in reality, it was his brother who came up with the idea, possibly inspired by magic tricks he’d witnessed while working in the music halls.

Launched in the late-1840s and known as ‘Bangs of Expectation’, Tom Smith’s crackers sparked a whole new Christmas custom, later evolving to include jokes, hats, gifts and jewellery. The company still exists today, and supplies crackers for the royal family each Christmas.

2. Victorian Christmas cards were the stuff of nightmares

Christmas cards were invented by Henry Cole in 1843, and by the end of the century everyone was sending them. But the festive illustrations favoured by the Victorians were far more wild and weird than the penguins and snowmen that adorn our cards today.

Artists produced such unusual images as: a dead robin, children riding flying bats, a man being attacked by a bear, a mouse riding a lobster, and two small children being harassed by a giant wasp. The cards were treated as works of art, being displayed in exhibitions and even critically reviewed. 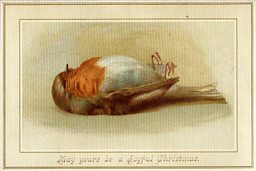 "May yours be a joyful Christmas" - unlike the dead robin's

3. Beer was once a popular present for young boys

The tradition of Christmas gift-giving seriously took off during the Victorian era. Whereas before presents were the preserve of the privileged, in the 19th century, everyone got in on the act. The most popular gift between Victorian adults was fruit. They also gave each other books, sparking a surge in seasonal publishing from authors keen to increase their sales.

For children, the rise of mass production meant that toys as Christmas gifts were now marketed to families of all levels, not just the wealthy. Alarmingly, in the early 19th century, beer was also a popular present for young boys. Gifts would be put in stockings, left under the tree or placed by the fire, but weren’t wrapped in paper until the 1870s and 1880s.

Christmas trees became incredibly popular during the Victorian era and are often associated with Prince Albert, who enthusiastically embraced the tradition. However, the idea actually first came to Britain from Germany with Queen Charlotte, the wife of King George III, who hung baubles and gifts on a yew tree. 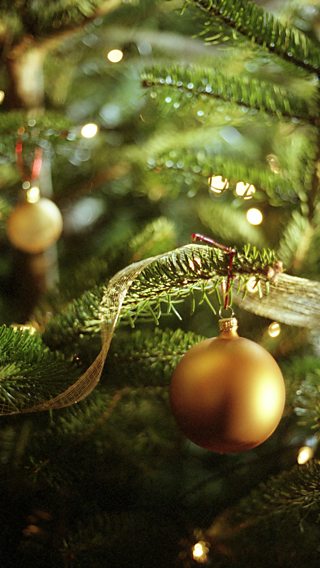 One thing the Victorians did give us is the practice of putting a star or an angel on the top of the tree. People in the 19th century also took to decorating their houses with foliage such as holly and ivy. This may have been a reaction to the industrial revolution, which had pushed millions of people away from the countryside and into urban living.

5. The idea that Coca Cola first dressed Father Christmas in red and white is a myth

Father Christmas has been part of British culture and folklore for centuries, appearing in various guises as a jolly festive spirit, symbolic of feasting and celebration. Over the years, he’s been depicted in almost every colour, from brown, green and yellow to reflect nature, to purple and gold. In the Victorian era, he was often depicted in red and white. So, while Santa Claus may appear clad in red in early Coca Cola ads, this isn’t where the image originated.

Victorian mince pies bore minimal resemblance to the sweet pastry treats we enjoy today. Filled with a mix of meat, fruit and spices, they were oval-shaped to represent either a coffin or the manger of the baby Jesus.

7. Queen Victoria’s Christmas dinner was sent to the Isle of Wight by train and royal yacht

The royal family’s festive feast was as lavish as you’d expect, including beef, a boar’s head, turkey, goose, plum pudding and mince pies, all served on gold plates. Oddly though, the food was all cooked in Windsor before being transported for three hours by special train and yacht to Osborne House – Queen Victoria’s holiday home on the Isle of Wight. Whether it was still hot when it reached them, we don’t know.

The idea of being kind to others at Christmas was very important to the Victorians. With millions of people living in poverty in major cities, temporary kitchens sprung up to offer food and cheer to the poor and homeless. In London in 1851, volunteers took over Leicester Square, decorating it with flags, flowers and festive lights. They set up a Christmas kitchen that dished out food including roast beef and rabbit pies, goose, potatoes, bread, biscuits, chestnuts, tea and coffee. It fed 22,000 people and got through 5,000lbs of plum pudding.