Alaska is a landscape of epic proportions, seven times the size of the UK, a seemingly simple concept to comprehend, but I didn’t truly appreciate its vastness. That is until I spent twelve solid hours driving north from Fairbanks (the most northerly city in Alaska) and still faced an endless expanse of open tundra all around.

(...the cold in Alaska is) as if heat is being sucked from your core through several layers of clothing.
Joe Tuck

The first time I headed to the frozen state, perched atop the northwest corner of the North American continent, I arrived in the dead of winter, to film wolves. For those who haven’t experienced minus 30 degrees Celsius, it’s a strange sensation; as if heat is being sucked from your core through several layers of clothing.

I returned to Alaska in spring, once again joining forces with cameraman John Brown, but this time with the intention of filming the behaviour of wild arctic ground squirrels, including the moment these hardy rodents emerged from hibernation on to the tundra. The temperature had risen to a balmy 0 degrees C.

We were driving the ‘ice trucker road’, known locally as the ‘Dalton’, heading north to a remote scientific research station in the Arctic. The journey was long, with enormous trucks hurtling by and golf ball sized pebbles being flung at our windscreen, making sounds like a gunshot - unnerving to say the least in a place where road signs are studded with bullet holes! We spent 12 hours a day sat out on the frozen tundra, on the lookout for potential characters; often excited by a scat or footprint that suggested something larger might make an appearance during our stay. I was lucky enough to see wild wolves again, in broad daylight, but it seemed they had a camera phobia that drove me to the edge of sanity.

If our resilience wasn’t tested enough, the tundra is home to some of the worst swarms of biting insects in the world. An odd thought, but when you consider the expansive, flat landscape covered almost entirely with still pools of meltwater, you can see why it attracts so many mosquitos! 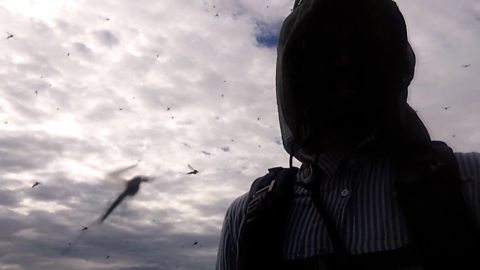 Web exclusive: A scourge of mosquitoes

Researcher Joe Tuck captures a scourge of mosquitoes on camera.

Despite our best efforts we were unable to capture wolves on film again, but were blessed to witness an intimate union of two arctic ground squirrels that made the trip, for all its trials and tribulations, worthwhile.

It has been an absolute privilege to spend time in Alaska, seeing its awe-inspiring wildlife that has to be seen to be believed. I hope the series goes some way to revealing the majesty of this rare and finite wilderness. 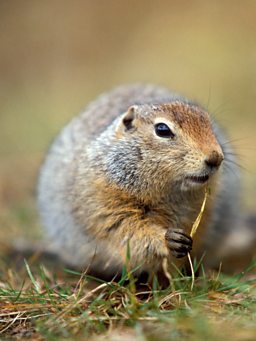