How did disposable products ever become a thing?

For us it seems completely normal to buy a cup of coffee, drink it, and throw the cup away. But it was not always normal, in fact for most of history it would have been regarded as a sign of madness. Materials were expensive, cups were valuable, and to throw something away after only one use was the road to poverty and ruin. So how did disposable products ever become a thing? The answer is that we had to be taught to like throwing things away, to accept it as normal. The story of how this happened is the story of twentieth century capitalism; yes of our liberation and wealth, but also of a growing environment catastrophe.

The villain in the story is, of course, plastic. This is sad not just because plastic is an extremely useful and valuable material, but because at the beginning of the twentieth century, plastic brought us modernity. The telephone, the radio, and the TV all came into our lives as marvellous plastic stuff. More plastics followed, changing the way we lived in almost every way, from footwear to furniture, from stockings to tennis racquets. Indeed a poll in the 1940s ‘cellophane’ was rated the third most beautiful word in the English language. 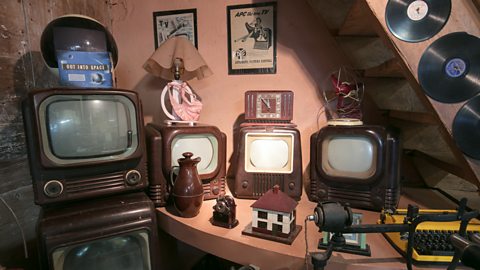 Why did we first fall in love with plastic?

Materials scientist Professor Mark Miodownik on how we first fell in love with plastic.

But there was a problem. The engine of this new ‘consumerism’ relied on people continuing to buy new things. This meant that products needed to break or be constantly replaced to fuel demand for more stuff. But plastic was too durable: its chemical structure makes it not just lightweight but also strong. Think about a plastic toy like a lego set, how often does it break? Hardly ever. Or the steering wheel on your car: strong, comfortable, grippy and durable, right? The steering wheel will outlast the car. But for an economy based on consumerism this is not good.

I particularly remember a McDonald’s advert which featured a bin that had to be fed, “they are hungry too”, chimed Ronald.

A new profession rose up to address this problem, called marketing and its answer was surprisingly simple - persuade people to voluntarily throw things away. Thus in the 50’s and 60’s new plastic products came on the market designed to be single-use, such as single-use cups, single-use cutlery, single-use straws. Restaurants no longer needed to offer you a ceramic plate to eat from, nor a glass to drink from, nor a metal spoon to stir your coffee. These new single-use plastics created a new life style driven by the growth of the fast food chains. I particularly remember a McDonald’s advert which featured a bin that had to be fed, “they are hungry too”, chimed Ronald.

From a business perspective it seemed odd at first, since the costs of giving away plastic utensils and packaging added to the cost of a meal. But an increasing number of factors tilted economics in the favour of disposability. Firstly, oil, the feedstock of plastics, was super cheap. Secondly plastic objects are made through automated mass production - the big cost is the factory itself – once paid for it’s approximately the same cost to make a million plastic spoons as it is to make ten. Thirdly, it was hygienic – a point the advertising departments and lobbyists to government emphasised. The disposable spoons had never been used before that meal and would never be used again. This was the new future – soon they envisaged everyone would only have disposable plastic cups and plates in their homes – it was the cleaner way to live and there would be no more washing up! Indeed this is the origin of the TV dinner.

They forgot about one thing though, the environmental cost. A scene in the TV show Mad Men illustrates the mentality of the time. Don Draper and his family go for a picnic and they spread out the tablecloth and they’ve got plastic cutlery and plastic cups they're using. And at the end of the picnic, Don’s wife Betty grabs the picnic blanket and he just shakes it all out onto the grass, wraps up the blanket and walks away. This type of attitude was the beginning of our modern way.

The answer isn’t to ban plastics, they are massively useful not least in our homes, hospitals and transport systems

As a result, consumerism did indeed boom, the economy grew, and life became more convenient - who doesn't like to eat a take-away every now and again, especially after a long day at work? But the reputation of plastics suffered. No longer idolised they became a by-word for a throw-away culture. No product symbolised this more than the single-use plastic bag, which was marketed to an initially reluctant public in the 1970s without any thought for what it would do to the environment once thrown away.

Yet of course there is no ‘away’ for plastics to be thrown. Because of their very stable chemical structure plastics do not biodegrade or dissolve in water. These, of course, are the very remarkable properties that make them so special. But once they have been used and then discarded, as they stay in the environment for a hundred years or more, and since the sea is pretty much downhill from everywhere, they tend to end up there.

The answer isn’t to ban plastics. They are massively useful not least in our homes, hospitals and transport systems. The way forward is for us to engage more with plastics, to build trust in and a love of plastics again. It is only by understanding that they are indispensable, and relearning how to value them, that we will summon the political will to end the era of disposability.

To find out more about what you can do to reduce your consumption of single use plastics go to the BBC Plastics Action website.

Mark is a materials engineer and Professor of Materials and Society at UCL where he teaches and runs a research group.