One of the major criticisms of social media is that it isolates us: it disconnects us from society and provides a poor substitute for real, physical interactions. However, there is no denying that the internet also offers new roots to communication and innovative ways to connect.

In "The Digital Human: Tribe", Aleks Krotoski asks if – rather than separating us – the digital world is helping us to revive old tribal connections, as well as actually enabling us to create new ones. What form do traditional kinship ties take, now we live so much of our lives online? What do modern tribes look like? And what purpose do they serve?

Skype, social media and the “death of distance”

The zoologist Desmond Morris explains how, as hunter-gatherers, we had a close bond with our tribespeople because we relied on one another to survive. These days, you might hear someone say, “I’ve got to go to Toronto to see my mother” but that is a phrase that you wouldn’t hear in a primaeval tribe because they would always be close – physically close together.

However, because our tribes have become “more scattered”, we have developed toolslike Skype, which enables us to talk to a member of our family who happens to be in Australia… and this new form of internet communication is helping to keep the tribal bonds going. Desmond believes that, “although people are often criticising computers and saying they’re isolating us… in fact, technology is actually helping us to re-strengthen those old tribal ties.”

Daniel Miller, a digital anthropologist at UCL, describes a “death of distance.” We – and our “tribes” – are not constrained by proximity in the way that we were.

As Aleks notes, living far apart is not always something we choose: “Political and social upheaval has also forced the movement of displaced populations around the world.”

Elisabetta Costa is a digital anthropologist and assistant professor at the department of media and journalism at the University of Groningen in Holland. She undertook a study on kinship relationship in Mardin, a small village on the border between Turkey and Syria, and found that Facebook is helping to strengthen old tribal connections in this multi-religious, multi-ethnic city.

In 1984, the PKK (The Kurdistan Workers' Party) launched an armed struggle against the Turkish government, calling for an independent state. Aleks explains that “the Government’s response was uncompromising – thousands of Kurdish villages were destroyed… forcing family groups to separate and disperse.” This was devastating for a group of people who are traditionally tribal and to whom extended family and lineage is crucially important.

So, in order to keep their tribal groups together, the Kurdish people had to adapt, and part of that was using Facebook to maintain links with extended family members. Elisabetta explains that “the architecture of Facebook has created these feelings of togetherness; this feeling of co-presence – so even if they were not interacting and communicating every day online” there is a feeling of being together. Now, social media is “the place where most of the kin relations are experienced.”

In Aleks’s words, “Social media has allowed this Kurdish diaspora to refresh old kinship ties, which would have died out had they not been mediated through the digital world.”

Twittering on: how online language can help create a group identity

Aleks talks to Meredith Clark, an academic at the University of Virginia who published a study into what has been dubbed “black Twitter”. Essentially, Meredith says, this is “black people having conversations in digital spaces” but what makes these conversations stand out to outsiders is the way people talk to one another. On digital platforms, like Twitter, these “tells” take the form of hashtags and very specific online language.

Aleks believes that language is a powerful marker as to whether or not you belong in a group. It brings those inside the group together, “but it can also separate us from people who don’t understand it.” Meredith agrees: “There are jokes… that are native to Twitter and if someone makes a reference to those jokes in an offline space, if you are a part of the culture then you get it and if you are not, then you don’t.”

Meredith believes that being black, specifically in America, is to be an “out-group”. However, “naming something like Black Twitter and using that name and using the collective voice and using the space for conversation to uplift one another, to affirm one another’s presence, and to recognise the contributions of other black people is essentially the work of elevating an out-group to in-group status.” Twitter brings individuals together to form one large tribe. Notably, some of the things that have been shaped in this online space have then moved offline and outside – “A hashtag isn’t just a hashtag.” The Black Lives Matter movement is an incredible example of this – proving that this “tribe” has a powerful voice. 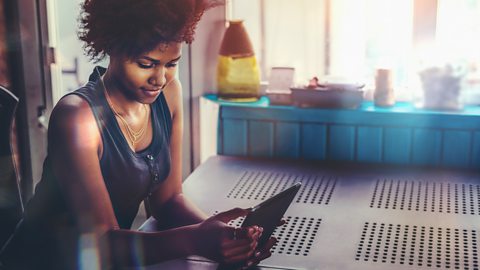 How 'out-groups' can become 'in-groups'

Meredith Clark on how the language and hashtags used online create spaces for groups.

Historically, a member of your tribe would be a neighbour, or family member. But, as Aleks finds, along with the internet, a new type of tribe has emerged – one that is made up entirely of strangers.

The internet is home to thousands of internet-based communities, like Mumsnet for parents, or support groups for fellow sufferers of health conditions – and these play increasingly important roles as more and more of our lives are lived out amongst the strangers who occupy the digital villages of internet land.

Notably, we don’t always want to reveal our identity to our fellow group members. Daniel Miller spoke to hospice patients and learned that anonymous online groups are hugely important for people who are undergoing transformations in their bodies which make them feel very anxious. They need to talk things over, “but they don’t really feel comfortable discussing with people that they know”, and they often prefer to discuss difficult and intimate problems with other people going through the same thing – without revealing their identity.

As Aleks puts it, these people “looked around for a safe place were they could ask the uncomfortable questions and they found it online.”