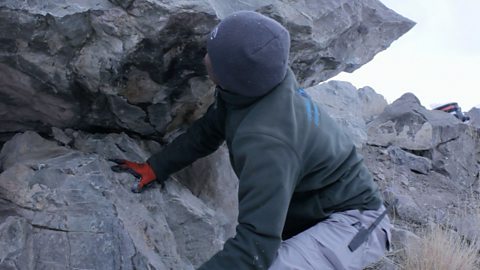 A guide to camera traps and how they were used to film snow leopards.

Getting up close and personal with mountain animals was a difficult task for the Planet Earth II 'Mountains' team. Director Justin Anderson sets out just how great the challenge was. Using new remote camera trap technology the team set up more than 20 cameras all across the high mountains of the world.

Nowhere was the challenge greater than in the Himalayas, where the team aimed to film the elusive snow leopard. After overcoming the challenges of altitude, the team had to wait for months before finally capturing unique images of the 'ghost of the mountains' up close and personal in a way never seen before.

Justin describes his ultimate shot: a snow leopard that walks into the frame and stops to sing, its voice echoing around the mountains.