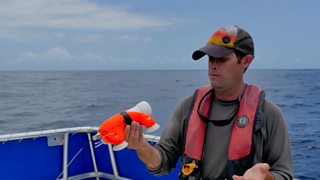 The sperm whale is the largest toothed predator on the planet and the master of the open ocean. The aim of the Blue Planet II team was to capture an intimate family portrait of sperm whales, to show how having a tight-knit family is a good way to survive in the 'Big Blue'.

Sperm whale family life is a complex social network and the logistics to film it are more than tricky – they live across the world’s seas and can rove for fifty miles or more a day, on many days you would be lucky to even have one encounter. Dr Shane Gero of Aarhus University calls sperm whales ‘surfacers’ rather than ‘divers’ because they spend more time at extreme depths than on the surface Finding and staying with a sperm whale family would be the biggest challenge we needed to solve, so to be able to make the film we had a two pronged approach which involved collaborating with scientists and camera operators around the world.

To really be part of a sperm whale family and join them on a hunt, we wanted to deploy sperm whale suction-cup cameras. Shane Gero of the Dominican Sperm Whale Project has been studying sperm whales for nearly twenty years in the Caribbean Island of Dominica and has been placing data and acoustic tags on them for a long time, so importantly had the experience to help us develop and deploy the camera tags, which he could then also use to further his research.

When we recovered the first camera tag we where hardly ready for what we saw: The female carrying the camera had a calf, and it repeatedly bumped the mother, as if for reassurance, in a way never seen before. Although some diving behaviour has been recorded on a sperm whale before, no one has ever managed to keep a camera on for a complete dive cycle. In the pitch black we hear her calls change to louder and more regular clicks – sonar that echoes from her prey. You can even tell when she catches a squid because the clicks speed up to a shrill intensity and then suddenly stop, as she presumably she pauses to feed. In the end we recorded at least ten whole dive cycles from Dominican sperm whales, allowing us to ride with the whale into its world like never before. 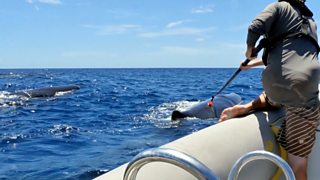 We also filmed a sperm whale family off Mauritius, where we worked with French camera operator René Heuzey. He has been filming the sperm whales there for many years so knew the family’s social structure and was the perfect person to join the team to help capture the more intimate, in-water moments between a mother and calf. René had been filming the calf since it was barely a few days old, so the calf and mother were very comfortable around René. The curious calf would come close to René to check him out. You could really feel the connection between mother and calf during their resting and socialising periods at the surface, a bond that seemed very much like a human parent and baby. Over the course of several years René gathered tender moments between a mother and calf, including suckling of the calf. These two filming approaches combine to give us a touching portrait of sperm whale family life.