Do you speak flower?

Thanks to Radio 4’s Natural Histories, we know all about the daffodil. But did you know they make terrible vase-fellows? Daffodils can cause other flowers in a bouquet to wilt. 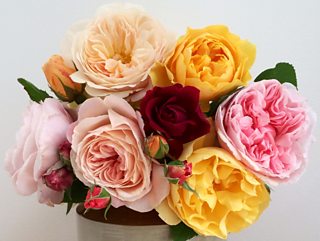 Red roses for love and passion, pink for admiration and yellow for friendship.

We give bouquets to show love, sympathy, congratulations and appreciation. The Victorians, both here and in the United States, made a great study of floriography, or the language of flowers. Enthusiasts even had floral dictionaries, designed to decode nosegays, worn as an ornament to the dress, or the intriguingly named ‘tussie-mussies’, small bouquets of flowers wrapped in a lace doily and tied with satin. Passing messages to admirers through the ‘language of flowers’ added a frisson of intrigue to stately Victorian courtship.

So, what was the secret language of flowers?

Mimosa represented chastity; mimosa closes up when touched, and at night-time. If you were embarking on a new courtship, red roses were what you were after; pink indicated slightly more hesitancy, but if you got yellow roses after a ball, then you needn’t have bothered curling your hair. It meant friendship only.

The language of flowers was hugely prone to misinterpretation which in turn all added to the excitement of the decoding, for example a flower at the top of a bouquet had a positive meaning, at the bottom, negative. If the flower was offered with the right hand it came with the signal ‘yes’, with the left, ‘no’. There were also so many different versions of floral dictionaries, and so many interpretations, that you could never be sure as the recipient that you had interpreted the message in the flowers correctly.

During the war, cultivated flowers were extremely rare as land had been given over to growing vital food supplies. Wartime brides often bulked out a bouquet with copious ferns, which rendered the bouquet so heavy she had to hold it by a handle. Red and white bouquets were seen very infrequently after the First World War as the colour combination was referred to as ‘blood and bandages’.

Wedding bouquets often still feature ivy for fidelity, juniper for protection, lilies for beauty and sweet william, the flower of gallantry. In a Royal wedding, a sprig of myrtle, the plant emblem of marriage, is used from Queen Victoria’s 170 year old garden at Osborne House on the Isle of Wight. This myrtle originated from Prince Albert's grandmother, who gave Queen Victoria a posy of myrtle during a visit to Gotha, and the Queen had the myrtle planted against a wall of Osborne House. The myrtle in the Duchess of Cambridge’s bouquet came from this myrtle plant.

The myrtle in the Duchess of Cambridge’s bouquet was given to Queen Victoria by Prince Albert's grandmother.

And as for daffodils, some flower dictionaries have their meaning as "my fond hopes have been dashed by your behavior” and some as “the sun is always shining when I'm with you." When you’re giving daffodils, flower superstition says never give a single daffodil, as bringing one into the house will bring misfortune; always give a bunch, to ensure happiness. Wordsworth would have approved. 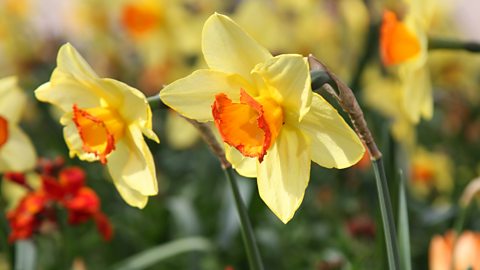 How a walk by Ullswater inspired one of the most popular poems in the English language.