How a community united behind this wheelchair-accessible home

As Edinburgh prepares to throw open its doors to the public this weekend, we take a closer look one of the properties available to view. The Ramp House was designed by architectural professionals to be a barrier-free home for their disabled child. While their own work experience put them at a tremendous advantage, they were also aided by the kindness of their neighbours.

When Ian and Thea McMillan realised that their terraced home could not be adequately adapted to meet the needs of their youngest daughter Greta, who has cerebral palsy, they did not panic. They looked upon it as a problem to solve.

Greta is part of everything. We need to find ways around (physical or other) obstacles
Thea McMillan

They said: "We have always had the philosophy that she is part of everything, and that we need to find ways around (physical or other) obstacles."

As an architect and design director respectively, Ian and Thea were uniquely qualified to use their professional skills to create a solution.

Before you can build a house, though, you need a piece of land - something which is in relatively short supply in Portobello, a coastal suburb of Edinburgh.

Feeling Greta was a welcome member into the local school and wider community, the McMillans were reluctant to move to a different area. Luckily a chance conversation with a local mechanic about their dilemma led to an offer of a piece of land next to his garage.

The most straightforward design solution for a wheelchair-friendly home would be to build on only one level. But the tight dimensions of the land purchased meant it was essential they built up, introducing the problem of how to travel between floors.

Greta made a film about her home with her sister Bee. Greta communicates using "eye gaze" technology.

POV footage of the ramp house

The key dilemma, according to Thea, was this: "A lift would create an immediate inequality where Greta uses the lift and we use the stairs."

A lift would create an immediate inequality where Greta uses the lift and we use the stairs.
Thea McMillan

The solution was to put a ramp at the heart of the home. That's not to say the architectural professional parents dictated all aspects of the design process.

Thea said: "There was lots of talking and listening about what we needed as a family to support our everyday living, then spatialisation of this, then more discussion, then refining of the design, and so the process continued.

"We were lucky that any time there was a question to be answered we could all sit around the kitchen table and discuss it. We also used models all the way through.

"These are very tangible things for children - in fact for anyone - and easy to interact with and adapt."

But professional experience doesn't guarantee a completely smooth process. Planning permission, for example, was not a simple obstacle to overcome. 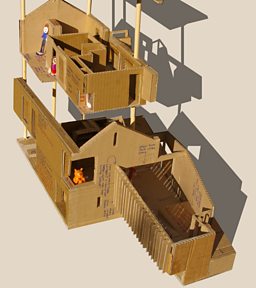 A cardboard model used in the design process

Thea said: "There were objections to our application, which meant it went to committee. But Arthur, who sold us the land, showed his customers the scheme and said, 'Look, this is Greta's house. Do we want this to happen in our community?'

"And 45 of them said 'yes' and wrote letters. I think it was really unusual that the planning department got lots of letters of support. We didn't actually need to ask any of our friends to write letters.

"It was lovely. It made us feel very welcome. In a way having those planning objections meant we realised how welcome we were in the community, which we might not have done otherwise."

Objections were submitted when the McMillans applied for planning permission

And strangers also came to their aid in the final stages of turning the building into a functioning home.

For three weekends before we moved in, we probably had 20 or 30 people each day coming to help
Thea McMillan

Thea said: "Ian was on the Portobello Dads mailing list so he just sent out a call saying 'we're just finishing our house, anyone available please come and give us a hand'.

"And these people just started turning up. For three weekends before we moved in, we probably had 20 or 30 people each day coming to help.

"People would turn up and say 'hi' as if they knew us. I realised their kids were in the same class as Greta, so they knew Greta really well but we just hadn't actually had the opportunity to meet these people. And a lot of them have become really good friends since then.

"It was incredibly touching. It was probably my favourite bit of the whole build, those weekends of people coming to help us get our house finished. The sense of community was really lovely." 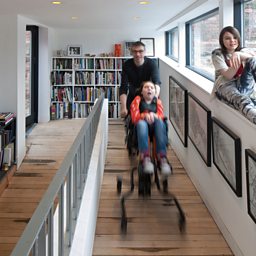 The ramps in Schnellbach's home are clearly visible from the exterior | Image: Andreas Focke / Christine Dempf

Over 1,000 miles away, in the southern German village of Gstadt am Chiemsee, is a home which was one of the influences on their approach.

Following an accident, Roman Schnellbach was left paraplegic and confined to a wheelchair. He reached the same conclusion as the McMillians about the limitations of building adaptation.

Schnellbach said: "It comes to you relatively quickly that a life without compromise is only possible in tailor-made homes."

Schnellbach employed Munich architect Florian Höfer to create a home which was wheelchair-friendly without feeling overtly medical. Höfer aimed to create a property which would give Schnellbach the feeling of having "wings despite being wheelchair-bound".

Höfer's design, Rampenhaus, made the ramp a dominant feature both internally and externally, something his client was unconcerned with. Schnellbach said: "After all, there is no reason to hide me."

The ramps have a relatively steep 10% gradient but the home is also fitted with lifts, allowing Schnellbach two different ways to move about his home.

Schnellbach said: "In the event of a power failure or when the lift is being serviced, I am able to get from one floor to the other. Besides, I think it's great that everybody has to go the same way, namely mine!" 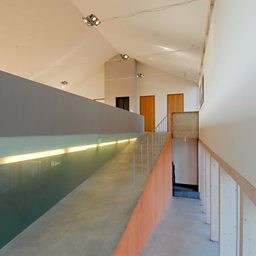 The Ramp House is open on the afternoons of 29 and 30 September as part of Door Opens Days. Architectural photographs of The Ramp House by David Barbour.