"This is the most hazardous project I’ve had to work on..."

Sue Edwards is the producer of Wildfires 2014: Inside the Inferno. Here she shares what it's like to film hazardous conditions in the Australian heat, working with the local firefighters and what really causes the majority of the catastrophic bushfires seen in New South Wales.

Why did you head out to Australia to film during the wildfire season with Simon Reeve and Kate Humble?

Wildfires are alien to us in the UK. Even though they’re increasing in size and frequency across the British Isles, especially on the moor-lands of Scotland and Wales, the concept of a raging fire the size of Greater London that consumes lives and properties in a matter of hours is not comprehensible. Furthermore, fire is immensely interesting – stunningly rich in science content. The technology and research that goes into understanding how fires start, spread and stop is wide and varied. Consequently it seemed a perfect subject area for BBC Two to explore.

Kate Humble, with her experience of live shows, and ever-changing environments was a brilliant choice for this series. She was able to throw herself at complex subject matter and pick it apart so that an audience would fully understand it.

How do the fires usually start?

In Australia many fires start naturally by lightning, especially in the coastal regions and in mountainous areas. However the vast majority of bushfires are started by people – deliberately through arson or accidentally through things like campfires or faulty machinery. Each summer in Australia the fire authorities respond to an average of 54,000 bushfires - up to 50% of these are deliberately lit or start under suspicious circumstances. And the fires can rage for months. It’s quite common for several fires to burn for over a couple of months each season. We witnessed one burning in the Wollemi Park, just northwest of Sydney that did exactly that.

Did the environment live up to your expectations?

When I was in Australia I couldn’t quite get my head around how big it was. The state we were mostly filming in, New South Wales, is over three times the size of the UK. I was also surprised at how varied the geography is there - it’s not like Ayers Rock at every look-out spot! There are vast forested canyons, rolling hills with pretty woods, African savannah-type plains, and thick, coarse shrub land too. And of course fires spread very differently depending on the terrain. For example a grass fire spreading across someone’s field will travel much more quickly than a thick forest fire, because grass is a fine, fast burning fuel compared to trees.

The weather in January was probably what I’d been expecting – hot and dry. But I have to say I wasn’t expecting the gusty winds that they get – basically fanning the perfect fire storms across the state.

The firefighters we worked with in the New South Wales and Victoria states were exceptional. Thousands of men and women (70, 000 in New South Wales and 60, 000 in Victoria) from all walks of life choose to volunteer to help their local fire brigades. When their pager goes off to alert them of a fire in their area, they head to the fire station and then drive out in a truck to the blaze. Some work all through the night and then go back to their day job in the morning and some will even travel to other states to help tackle wildfires. The level of dedication, and professionalism was amazing to witness.

The brigades were more than happy for us to document their firefighting skills - as long as we were wearing the right protective clothing – which included wearing cotton underwear, as man-made fibres tend to melt onto the skin! All of our crew had to undergo specific bushfire heath and safety media accreditation before heading out to the fire ground, so we were well prepared for the filming.

The destruction of the land must be severe – what’s the effect on the wildlife like? Does it ever affect residential areas?

Wildfire ravages the land in Australia. Initially after a blaze you’d assume that everything had been killed off. The truth is that most plant-life in the Australian bush relies on fire to regenerate – the heat triggers seed release, germination, or re-sprouting, and many nutrients are returned to the soil after a fire. Most animals are nimble enough to escape by running away or hiding down holes. However some of the marsupials such as the Koalas and Possums get caught in the fires. Thankfully there are some outstanding animal care groups that rescue these animals and rehabilitate them. Also, these animals breed extremely quickly and so can repopulate an area in a short amount of time.

When the fires reach the urban interface the destruction becomes altogether more serious. There have been some terrible and tragic losses over the years including the season in 2009 in Victoria when 173 people died and over 2000 properties were lost on Black Saturday.

We joined the brigades in New South Wales very shortly after a massive loss in the early season where 216 properties were destroyed – most of them located in the stunning Blue Mountains region. The firefighters across Australia prioritise the fires they fight - depending on where the threat is greatest to life and property. It is thanks to their hard work that many lives and homes are saved year in year out.

When approaching the project, was there anything you had to differently or compromise on because of the hazardous conditions?

This is the most hazardous project I’ve had to work on. The thought of being killed by the radiant heat of a fire 100 metres away (before the flames even get to you) isn’t the nicest idea in the world. We had to think very carefully about how all the crew would get adequate heath and safety training. We issued specific first aid training to everyone on the project and emergency protocols were put in place. Even thinking about how we would communicate in a country that’s largely wilderness with no phone signal had to be thought out – each 4x4 vehicle had its own satellite phone installed. Add to that the poisonous snakes and spiders… our risk assessment was quite a read, putting it mildly. The phrase that kept coming back at us was that ‘the safest place to be is as far away from a bushfire as possible’ - and we were trying to go inside it!

It was paramount that we were embedded in a fire crew, under the protection and instruction of a group captain at all times. Protective clothing that was not going to melt and ‘shrink-wrap’ onto your body was also essential. Keeping hydrated is easy to forget about whilst shooting but you really couldn’t afford to forget about it on this project. At no time could anyone take an unnecessary risk. Safety first, and no compromises.

What do you think is the future for tackling fires in Australia?

Wildfires in Australia are not going to go away, they’re part and parcel of the ecology there, so the future is about how fires can be better controlled and the fuel-hazards reduced ahead of time. With less fuel on the ground, fires are less likely to get out of control. Many fire agencies burn ahead of the season in a controlled fashion to reduce the fuel on the ground. However, this is contentious because burning releases carbon into the atmosphere and impacts global warming. Some believe that it is better to fight fires when they happen rather than burning in advance as a precaution.

Certainly Australians are very interested in exploring the use of unmanned aerial vehicles (or drones) in the future as they can fly at night and in limited visibility (such as thick smoke). The thermal imaging technology used by the military is attached to these drones - so they’re able to scan the fire-ground safely giving an accurate up to date fire-map for the agencies to plan around. With more accurate mapping and fire-prediction models it will mean that fire agencies will be able to respond more rapidly and strategically in order to contain and extinguish fires more quickly. 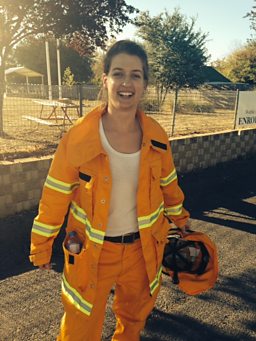 The team shooting on location

A fire truck is destroyed