Eagles on the Chilkat

The Chilkat River in southeast Alaska is one of my favourite places on the planet. It flows for about 50 miles from the Chilkat Glacier in Canada, draining into the sea just south of the little town of Haines, Alaska.

As many as 3,000 eagles gather along this short stretch of river, often looking like macabre Christmas decorations as they festoon the cottonwood trees that line the river.
John Brown

It is a beautiful river at any time of the year, but it is in the winter that the river’s real secret becomes apparent. A huge underground reservoir of meltwater, accumulated during the spring and summer in the alluvial deposits of the river channel, remains 10-20C above the surrounding water temperatures. This warmer water then percolates into the river and, for a stretch of 5 miles or so, the Chilkat River remains ice free when all of the surrounding landscape is frozen solid by the brutal Alaskan winter.

This remarkable natural phenomenon attracts the largest concentration of bald eagles in the world. The birds are drawn to the huge protein and fat rich feast provided by the last runs of salmon. As many as 3,000 eagles gather along this short stretch of river, often looking like macabre Christmas decorations as they festoon the cottonwood trees that line the river.

I absolutely adore this place; and I have been lucky enough to film here for the last three winters. It has been a real privilege to witness how the number of eagles, and general ‘feel’ of the river varies from year to year.

I would set off before dawn each day and drive the 30 miles or so to the most active stretch of the river. Each day is different, so the first task of the morning is to cruise along the riverbank to get a sense of what had happened during the night.

I love this part of the day, it’s like reading though the morning newspapers; fox tracks running along the bank here, coyote tracks following in a wolf’s trail on the far bank, the distinctive red ‘splat’ on disturbed snow showing that a live salmon had been pulled from the river. Once I saw a moose emerge from the willows on the far bank and cross the river towards me– odd behaviour, and I knew something was up – 10 minutes later I saw the unmistakeable black forms of 7 wolves, just distinguishable on the far bank, ploughing through the snow after another moose.

I would look to find somewhere quiet and settle in to film. The areas where the salmon were most active would vary from day to day depending on ice cover, but I knew that good salmon activity would usually mean good eagle action at some point. 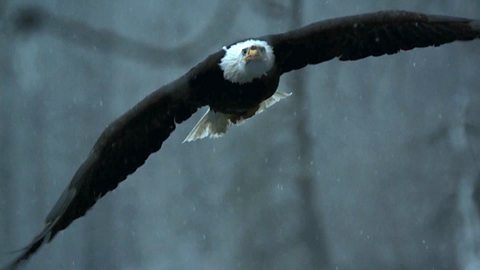 Some days were just heavenly, my favourite mornings would be the ultra-cold ones when hoar frost would coat everything and mist lay, like another fluid, on top of the super cold water. The soundscape of eagles, ravens and the occasional wolf in the brittle air is incredibly evocative of everything that is Alaskan wilderness.

By this point of the year the salmon were a pretty forlorn sight; these magnificent fish had lived their lives out in the vastness of the Pacific Ocean, now they had come home to spawn. Their bodies would have started to decompose as soon as they had re-entered the fresh water. Now they were floundering wrecks, a shoal of zombie fish flapping in the icy shallows waiting to die.

It all seemed far too easy for the eagles; they could seemingly pluck the fish from the water at will. I was always slightly amazed – and impressed – at how much of a fight these half dead fish would put up, and equally amazed at the brawl that would kick off when one was removed from the shallows

It certainly seemed to me that there was plenty of fish to go around, and that they were such easy pickings, but no sooner had an eagle decided to grab one then there would be all out warfare. Eagles would come screaming in from all directions dive-bombing the incumbent bird, often physically clattering into it with talons outstretched.

It was always fascinating to watch through the viewfinder; eagles are surprisingly expressive birds, and you could really anticipate the action using their body language – a subtle crouch and hunching of shoulders usually meant that a bird was about to get hit. Often I would also hear the whistling of wind through flight feathers as the incoming eagle, tucked into a stoop, shot over my head before colliding with the bird on the ground.

It seemed to me that there was more going on than just competition for food; there were certainly lots of political manoeuvrings and expressions of dominance contained within these tussles. Immature birds would invariably come off worse, and depending where I was on the river, I got to learn the characteristics of the resident ‘hard man’ – the dominant bird who would weigh in on every contest, and usually win, regardless of any interest he may then have in the dead fish.

The periods of intense activity were interspersed by long periods of waiting – the world would return to normal, magpies and ravens would materialise and pick over the fish carcass, trumpeter swans might drift by and my toes would complain loudly of the cold then appear to die. I would zone out in a state of hypothermic bliss, surrounded by magical landscape and a cast of very special creatures. 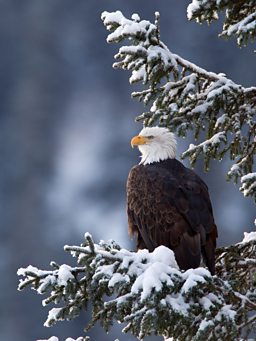