Bears find the highest quality food, wherever they live.

A single polar bear’s range can span 300,000 square kilometres; the size of the United Kingdom and Ireland combined.

When hibernating a bear will lose up to a third of its body weight and only breathe once a minute.

The sloth bear has lost two of its front teeth and has flaps which cover its nostrils so that it can suck up its favourite food, termites, more effectively.

The need to feed is strongest for a bear that is preparing for hibernation. If a bear does not have enough fat reserves it may not survive the winter. The ability to gorge on a bonanza of food and convert it to fat is a lifesaving ability. Every year, at the end of summer, grizzly bears in Alaska wait for spawning salmon to return in their thousands. Their physiology changes and they become eating machines, entering a state called hyperphagia. In this state their appetite is almost insatiable and they will eat for twenty hours in a row, sleep for four and then go again. There are so many salmon that the bears tend to eat just the fat rich eggs, skin, and brain of the fish that they catch. They can consume a staggering 100,000 calories per day, the equivalent of 1282 boiled eggs. 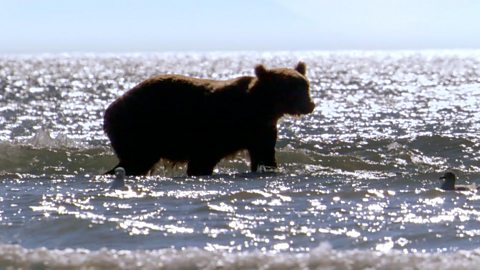