Could an electronic implant switch off rheumatoid arthritis? 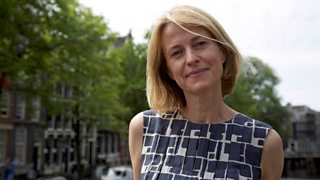 Our immune systems are amazingly complex and every day they work around the clock to protect us from infection. But sometimes our immune systems can go wrong, attacking our own bodies instead, and causing damage. When our cells our damaged, the result is inflammation – the typical redness and swelling that you see with any injury. But this can happen anywhere inside the body, where you can see it. Autoimmune diseases that cause damage and inflammation inside the body include rheumatoid arthritis, Crohn’s disease and multiple sclerosis which are painful, debilitating and very difficult to manage. Currently the best treatments for these diseases are drugs, which, while helping to control the symptoms, can also come with nasty side effects. But now a new discovery has given us fresh insight into how this unwanted inflammation occurs and is offering a new approach to the treatment of these devastating conditions.

It all began at New York's Feinstein Institute, where Dr Kevin Tracey and his team were studying inflammation. They knew that this occurred when the immune system produced too many inflammatory molecules and they decided to focus on one of these – a molecule called Tumour Necrosis Factor, or TNF.

When our bodies produce TNF in the right amounts, it plays an important role in fighting infection and in wound healing, but when we produce too much TNF it causes inflammation – which we feel as pain, redness, swelling and loss of function. What Dr Tracey and his team realised was that signals controlling the production of TNF were being carried to the immune system by the nervous system, and this discovery inspired a radical new idea – what if we could somehow use our nerves to control these messages and treat disease? Medical research had already shown that using drugs to ‘block’ TNF in the body could help reduce inflammation, but what if you could use the nerves to stop the excess TNF from being produced in the first place? 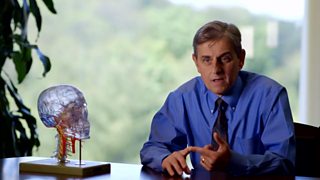 It was this ingenious idea that led to the development of the first ‘bioelectronic’ medical device in California. This device was designed to be implanted alongside the vagus nerve in the neck which connects the brain to the major organs including the heart, the lungs, the liver and the spleen, where TNF is produced. Of the 100,000 or so nerve fibres that make up the vagus nerve, the researchers had identified about 4000 that controlled the production of TNF in the spleen, so they created a device that could stimulate these fibres and regulate TNF production.

The first trial of this new implant took place in Europe in patients with severe rheumatoid arthritis, and Gabriel travelled to Amsterdam to meet Dr Frieda Koopman, one of the researchers on the study, as well as one of the patients who received the implant.

The stimulator for this device was implanted into patients’ chests and was connected by a wire to an electrode that coiled around the key group of fibres in the vagus nerve. Once the patients had received the implant, all they had to do was stimulate the device for a minute a day by passing a magnet over the stimulator.

While these early results are very promising, it’s important to remember that TNF is only one factor in diseases like rheumatoid arthritis and there were some patients who did not respond so well. However the exciting thing about bioelectronic medicine is that this is just the beginning and TNF is only the first target to be tested. In future, as we learn more about the relationship between the nervous system and the immune system, we could see bioelectronics being used to treat a whole host of diseases – in fact trials are already taking place in Crohn’s disease.

The other exciting thing about bioelectronic medicine is that the devices themselves are improving rapidly. Already in California the company behind the first device are working on a new model. This new implant is tiny – all the components are included in one small micro-regulator which is implanted along the vagus nerve with no wires and no external battery. Instead all the patient would have to do is charge the device with a neck collar for about a minute a day.

It will take time for devices like this to be approved for general use – first they need to go through large clinical trials which could take years to complete. But if they do succeed we could be looking at a future where bioelectronic medicine can offer patients with auto-immune diseases a life free from devastating inflammation and drug treatments.