The Frost Tapes: Five incredible interviews, lost for a generation

By Wilfred Frost, presenter of The Frost Tapes

When Dad died in 2013 – suddenly and unexpectedly – I started a journey that would ultimately lead me here, to The Frost Tapes podcast.

Dad recorded over 10,000 interviews in his lifetime – the exact number is unknown. And a lot of his early work has not been seen for decades. Well over half of the footage in the podcast has not been heard since its original broadcast. Some of it never aired in the first place.

The podcast focuses on Dad’s work in America in the 1960s and 1970s. This is where a huge portion of the tapes fit that label of footage "lost for a generation". And as I reviewed it, my jaw would repeatedly hit the floor – these are conversations that could have been happening today. The parallels are extraordinary.

It has been an enormously time-consuming process to get to this point – but incredibly rewarding. In fact – it's been a privilege – to listen to what some of America’s most influential leaders and activists had to say on hugely important topics like racism, women’s liberation, press freedom and the politics of hope vs fear, and to admire and learn from how brilliantly Dad got them to open up. I hope you enjoy listening to The Frost Tapes.

And here are five of my favourite conversations from the series... 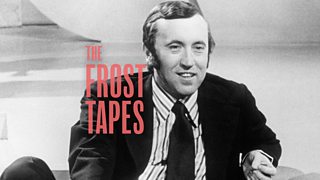 Listen to The Frost Tapes on BBC Sounds 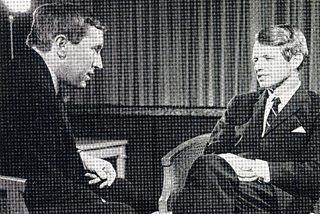 The brother of assassinated former President John F Kennedy, Senator Robert Kennedy, was running for President in 1968. Dad interviewed him in late March that year, and posed to him a question he asked so many throughout his career – “How would you like to be remembered?” – but never again with such tragically poignant effect. Bobby Kennedy would be assassinated in early June. His answer is the climax to the first episode of The Frost Tapes.

Robert Kennedy: I think something about the fact that he/I made some contribution to my country or those who are less well-off. I think, again, back to what Camus wrote about the fact that, "Perhaps this world is a world of which children suffer, but we can lessen the number of suffering children. And if you do not do this, then who will do this?" And I'd like to feel that I've done something to lessen that suffering.

Listen to first episode of The Frost Tapes: The Next President 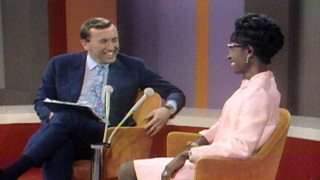 Shirley Chisholm was the first black Congresswoman in America, and in September 1969 she sat down with Dad, who asked her about the obstacles she had faced in reaching the House of Representatives. She explains how she in fact faced more sexism than racism in Congress, but that she was hopeful change was coming.

David Frost: Tell me, do you think that there can ever be a woman president of the United States, Shirley?

But you have to give you gentlemen a chance to get acclimated for this thing that need to happen in the future because it is going to happen. Nobody will be able to stop. It's going to happen. Can't you see what is happening now on the American scene? So many things are happening on the American scene that many of us never dreamt would have happened. Black people no longer passive, rising up and saying, "We want our share." Students on the campus saying, "We are tired of sham and hypocrisy." We want leadership that we can look up to. Things that are happening that a lot of us in this room, I dare say, never dreamt could have happened. So therefore, this is why I predict very comfortably that a woman will be president someday in this country.

Listen to third episode of The Frost Tapes: Women’s Liberation

This interview I only rediscovered a few months ago. Had I restored and digitised all of The David Frost Show tapes as soon as I reclaimed them in 2016 it would have cost over $200,000. So I did it slowly – big names first. Many of the canisters were not labelled, and we got to those last. This particular interview with Martin Luther King’s widow in October 1969 had slipped through the net. The video was unsalvageable, but the audio is very much there: 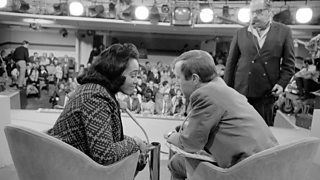 David Frost: Of all the gifts. I mean, mementos or whatever. Is there one gift or memento that he gave you that you value more than any other?

Coretta Scott King: The last thing that he gave me was some artificial flowers. This was in March a few weeks before his assassination. And he was getting ready to go out of town. He'd never given me artificial flowers before. And when he called and said, did you get your flowers? I said, all the flowers came, they're beautiful and they're artificial. And he said, "Oh, yes, I wanted to give you something that you could keep." It was so unusual because he always gave me fresh flowers. And after his death, you know, the story, all of this came back to me.

Frost: But do you, did he have a continual premonition of the danger he was in, or do you think he was, had a special sense a few weeks before that something might be about to happen?

King: I have a feeling that there was always this awareness, throughout the years of struggle, you know, and I think as time went on, there was an increasing awareness that something could happen. But I think during the last year, the way he went about his work, the feeling of urgency that he had, he worked harder than I've ever seen him work. And, it was as if this was the last job he was going to do. And, you know, he said that it was America's last opportunity to prove that non-violence could work.

Listen to the second episode of The Frost Tapes: Police and Panthers 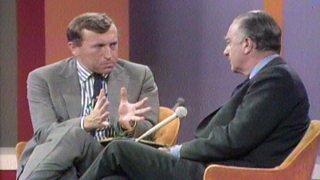 Cronkite was known as "the most trusted man in America", and probably America’s most famous newsman. Dad interviewed him in 1969, aged 31, and was very much the apprentice interviewing the legend as they discussed at length the art of broadcast journalism.

Of course, Dad would become a legend himself, and for me as young broadcast journalist myself, it is poignant and informative to see Dad in that position when I only ever knew him as a legend.

Just a few years before the Watergate scandal would emerge, Dad asks Cronkite: “is it possible for huge things to be concealed?” Cronkite responds, “Yes I think it is, but this is the job of the press, to uncover as much of that as we possibly can, to be sure that these things aren’t concealed. I don’t think they can be concealed forever; I think they will come out, the truth will out.”

Listen to the seventh episode of The Frost Tapes: Power and Media 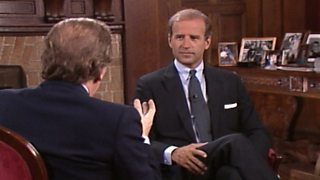 In a bonus episode to the series, we step beyond the 60s and 70s and hear an interview with Joe Biden. Dad interviewed him in September 1987 for a series called The Next President with David Frost (1988). He interviewed all 12 candidates – 6 Republicans and 6 Democrats. But only 11 episodes aired as then-Senator Joe Biden was forced to withdraw. The over two-hour interview has never been seen or heard. Until now.

David Frost: And do you think the qualities you need now to get nominated or to get elected are just totally different from the ones you need to govern or not?

Joe Biden: No. I don't. I, I think they're the same. I think the American people tend to choose the nominee who they perceive, all other things being equal, has the most strength and the most, the greatest strength of character.

I don't want to sound overly confident about it but the degree of confidence I have about being able to compete in the arena is strong. But the harder test, David, it's not the one can I do it better than my opponent or my prospective opponent, the harder test when everybody goes to bed and you're sitting in this library by yourself and you ask yourself, "Now, can I be the kind of president that I think America should have? Can I be the kind of president that Abraham Lincoln was? Can I be the kind of president Franklin Roosevelt was? Can I, can I, can I be a great president?" And then you sit and think for a moment and beads of sweat pop out on your forehead, at least, on mine and you say, "Let me put that decision off to later. (laughs) Let me, let me just focus on (laughing) why I'm better than the other guy. So, they're two tests. (laughing) One's much harder than the other.

Listen to the sixth episode of The Frost Tapes: Frost / Biden Bonus