Yusuf Muhammad, 33, is an inventor, engineer and an industrial designer. He graduated with a double masters from the Royal College of Art and Imperial College London and has won numerous design awards including the International James Dyson Award in 2009, Transport Award for the Design Museum's Designs of the Year 2012 and most recently a prestigious Red Dot in 2016. 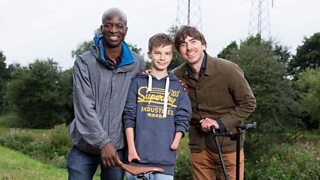 Yusuf with Oscar and Simon Reeve

Yusuf is currently a director of a company he co-founded called Plumis after inventing an innovative fire sprinkler. Automist Smartscan, his proudest invention, uses a smart sensor to find the location of the fire, before spraying a targeted blade of water mist. It can therefore extinguish fires with a tenth of the water used in traditional systems. The invention is being used to help homes meet building regulations due to the cost effective nature of the system and the ability to fit it retrospectively.

Yusuf believes good design is about empathy with users, and discards assumptions in order to ask the right questions, understand context and rationale, and believes in relentless iteration and testing. He became a designer because he was naturally curious about the ideas behind the things that surround us, and believes, done right, design can help create a better future.