Did Hermann Goering's brother save innocent lives from the Nazis?

Journalist and broadcaster Gavin Esler uncovers the story of leading Nazi Hermann Goering's lesser known brother Albert, who claimed he saved the lives of those threatened by Nazi persecution.

This is the story of two brothers. The older brother, one of the most notorious Nazis of the 20th Century, Hermann Goering, Hitler’s deputy, the Fuehrer’s chosen successor, the man who led the Luftwaffe into the Blitz and the Battle of Britain. His younger brother, Albert, was a mystery, a man who puzzled Allied interrogators after the war with unbelievable tales of anti-Nazi heroism, and who remains an enigma 70 years later. 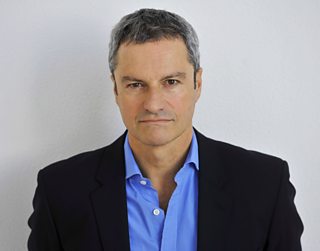 Now new evidence about Albert Goering has led to a campaign to honour him in Israel, as someone who helped Jewish people while his brother was among those who organised the Holocaust. And in a remarkable BBC interview with his only daughter, Elizabeth, she offers an extraordinary reason why Albert Goering risked his life to help those oppressed by the Nazis, even to the extent of claiming that he was protected from the Gestapo and SS by Hermann Goering himself.

“As far as he could, [Hermann] helped me in those things,” Albert would tell his interrogators during the Nuremberg trials. When it came to family, Hermann Goering “had a warm heart”.

Not surprisingly the Allied interrogators regarded anyone with the name Goering as suspect, and viewed Albert as just another devious Nazi trying to avoid being hanged for war crimes. Richard Sonnenfeldt, one of the allied interpreters, dismissed Albert’s stories as a fantasy from “a hand-wringing type of witness who would talk too much”. An interrogation report said Albert was guilty of “as clever a piece of rationalization and white wash” as the interrogators had ever seen. It concluded: “Albert Goering’s lack of subtlety is matched only by the bulk of his obese brother.” 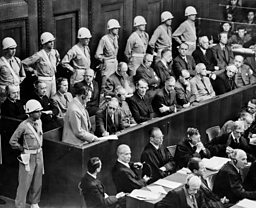 Hermann Goering (standing, left) in the dock at the Nuremberg Trials

The idea of a ‘Good Goering’ seemed truly unbelievable, although the two brothers were different from one another in terms of looks, physique and character. Hermann was born in 1893, Albert in 1895. They spent some of their childhood in a prosperous suburb of Berlin, Friedenau, an area Germans call “buergerlich”, meaning bourgeois and middle class. Their house still stands, unmarked by the wars of the 20th Century, solid Prussian red brick. Their father, Heinrich, was often away from home on German government business, particularly in Africa. Meanwhile the Goering boys’ mother, Fanny, took a rich lover, Hermann von Epenstein, who owned the Friedenau house and acted as a guardian for Albert and his brother.

By the time of World War One, Hermann was already loud and overbearing. He sought action and became a much decorated fighter pilot, commanding the squadron of the famous Red Baron, Manfred von Richthofen. Albert, meanwhile, was in the mud of the trenches, a signal engineer. In the 1920s, amid the chaos and humiliation after the war, Hermann Goering met a failed artist and ambitious political activist, Adolf Hitler, and became one of the early members of the Nazi party. Albert – already with a reputation as a ladies’ man – was on his second marriage, with two step sons, and a humdrum career as an engineer, eventually landing a job in Vienna, Austria’s rather racy multicultural capital. He enjoyed Viennese culture, the wine, and the social life, with a wide circle of Jewish friends. Among them, the part owners of a Viennese film company, the brothers Oskar and Kurt Pilzer.

But by 1938 Albert’s bohemian life was coming to an end. Hitler annexed Austria. Hermann Goering was a key player in imposing Nazi order, bullying Austria’s politicians by telephone, demanding Nazis be given government positions, and finally insisting that German troops should invade. The Nazi nightmare of arrests, Gestapo swoops and political opponents being led off to the Dachau concentration camp, had begun. The Pilzer brothers were among those arrested. Seven years later, in 1945 in the interrogation rooms during the Nuremberg trials, Albert Goering stunned his interrogators by giving them a hand written list of 34 people he claimed to have helped escape the Nazis, with the Pilzers at number 24. Two big names stand out from the list – Dr Kurt Schuschnigg, the former Chancellor of Austria, and Archduke Joseph Ferdinand of the royal Habsburg dynasty. Albert claimed that he and his sister lobbied brother Hermann about freeing some Austrian prisoners and Hermann “was very embarrassed” but the next day “the arrested Habsburger was free again”.

The Allied interrogators still did not buy Albert’s story, until two bizarre twists of fate helped change their minds. Kurt Pilzer, who with his family had escaped to the United States, wrote to the Nuremberg prosecutors, and pleaded Albert’s case. Then by chance a new interrogator arrived, an American, Victor Parker – a Jewish refugee whose real name was Paschkis. His aunt, Sophie Paschkis had converted to Catholicism and married the composer Franz Lehár – whose music, including The Merry Widow, was admired by Hitler. The Lehárs were at number 15 on Albert Goering’s list of those he had helped save. The interrogator, Victor Parker, had heard from his aunt Sophie that Hermann Goering’s brother Albert had indeed helped Jewish people to escape the concentration camps. The Good Goering’s fantastical stories were suddenly validated by one of the men sent to interrogate him at Nuremberg.

Yet Albert’s troubles were not over. The authorities in Prague wanted him on charges of Nazi collaboration. But this time it was members of the Czech resistance who had worked in the Skoda factory where Albert had been a manager, who saved him. They testified that Albert Goering had helped them undermine the Nazi occupiers, passing on information to aid the resistance. By 1947, Albert was finally free, but his life was in ruins. The Goering name did not help him find a job. His womanising undid his four marriages, and he continued to drink prodigiously, dying in obscurity in 1966, his deeds publicly unrecognised. But now, 50 years after his death, the enigma of Hermann Goering’s little brother is slowly being uncovered. One historian, William Hastings Burke, has made a case at Yad Vashem in Israel for Albert to receive Israel’s highest honour for a non-Jewish person. Like Oskar Schindler, Albert could finally be recognised as one of the ‘Righteous Among The Nations’. These are people who ‘risked their life, freedom and safety’ to rescue Jews during the Holocaust.

Irena Steinfeldt of the Department of the Righteous told me the request is being seriously considered, although the standards of proof are very high and personal testimony is now extremely difficult to obtain after more than seven decades. But a “Good Goering” recognised by Israel, she agreed, would remind the world that evil is not something we are born with. It is something we choose. Hermann Goering chose that path. Albert chose a different way.

And there is one final extraordinary twist which may explain Albert’s motivation in all this. In researching our programme we tracked down Albert Goering’s only daughter, Elizabeth Goering Klasa in Lima, Peru. She told us a family secret. Her father Albert confided in her mother that he was not Hermann Goering’s brother after all. He was his half-brother. They shared the same mother, Fanny Goering. But Elizabeth say Albert Goering told her mother that he was “Hermann von Epenstein’s son”, the son of the rich lover of the Goerings’ mother.

Hermann von Epenstein converted to Catholicism. But he was born Jewish.

Listen the full story of The Good Goering online now.