Opera Season
On TV, radio and digital, in collaboration with the V&A and the Royal Opera House 30 September 2017 - 31 December 2017
Main content

BBC Arts Digital has partnered with Garsington Opera to produce Person 181 - an innovative 360-degree simulated experience of Silver Birch: A People's Opera, which is inspired by Siegfried Sassoon’s war poems and the testimony of a British soldier who served in the Iraq War.

You are Person 181... it is opening night at Garsington Opera and you are about to go on stage with 180 performers in the brand new production of Silver Birch: A People’s Opera. Venture behind the scenes, into dressing rooms and warm-ups, and onto the opera stage itself in 360 video utilizing ambisonic sound technology - putting you in the centre of the action. 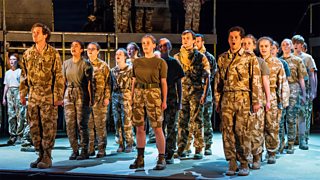 Silver Birch is an exciting new commission from leading UK composer Roxanna Panufnik, with a libretto by writer Jessica Duchen. The piece was inspired by Siegfried Sassoon’s war poems and the story of veteran Jay Wheeler, who served in the Iraq War alongside his brother. The opera chorus includes first-time singers from various community groups, including veterans and their families.

Discover more about the Silver Birch production in the series of films below: we meet Jay Wheeler, whose stories of participation in the Iraq conflict in 2003 inspired the production's development, as he sees the opera for the first time and shares his experiences with the cast; follow four military veterans as they take on performing in an opera for the first time; and accompany Garsington Opera's creative team as they engage with 180 people from the local community participating alongside opera professionals.

You can view the film in several ways:

1. Use Google Cardboard or a similar headset to view the YouTube 360 video via the YouTube smartphone app.

2. View the 360 video on your tablet or smartphone without a headset - move your device to move around.

3. View the 360 video on your laptop or desktop, and move around by clicking and dragging.