Fermenting is the new juicing. There are few foodstuffs, fermenters believe, that are not improved by being left somewhere warm until they bubble, turn sour, or what we, as laypeople would describe as ‘go off’. Marking the Food Programme’s episode exploring fermentation, we thought we would come up with a guide for getting ahead of the fermenting curve.

As well as fermenting punk and general strikes, the 1970s were also big on home-made wine. No orange Seventies kitchen was complete without something revolting bubbling in a bucket in the corner. Home-made wine was made by people who were the living embodiment of the triumph of hope over experience. “Well the 1974 peapod was absolutely revolting, but this year’s broccoli and tea-bag’s going to be cracking!” 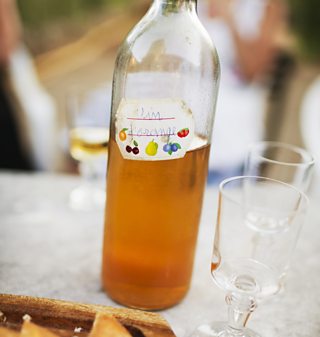 Home-made wine was made out of things that should have been thrown immediately on the compost heap by people who had been brought up with a post-war “you can’t waste that!” attitude.

The main advice we can give you about home-made wine is that when someone asks you what you think it would go with, say “two paracetamol” and then run away very quickly.

Yet another Seventies staple, cottage cheese was THE way to lose weight in the Seventies. Essentially cottage cheese is the lump that bobs up in the middle of your cup of tea when you’ve left the milk out in July. It does not make you live longer, but it certainly makes it feel longer. It was eaten, for maximum virtue points, on a piece of what looked a corrugated roof tile, next to two lonely grapes and a piece of celery.

Ginger beer, another beloved drink from the Seventies, was created from a ginger beer plant, which was basically a huge lump of mould. A bit of the mother ship was passed on, in jam jars, by mums at the school gate. Woe betide you if you upset the ginger beer plant and it died; it was a sort of bacterial chain letter. Ginger beer was responsible for many startled house guests when this extremely unstable liquid exploded and all the bottles erupted under the spare bed.

Let’s not think of delicious home-made bread as a lump of wet mouldy flour. Particularly not when we’ve just paid £3.45 for a loaf of it and it’s got olives, capers and pine nuts in it. Cheap nasty white bread tastes nice, hipster bread is good for us, is very expensive and has “bits” in it, usually very surprising bits. Small Lego figures, holly, snails. That’s what you’re paying extra for. 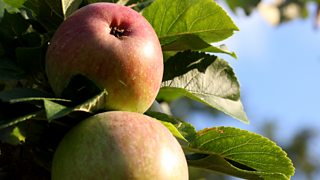 Apples growing in an allotment - the essential ingredient of Scrumpy.

Fermented foods are supposed to be excellent for your gut health, and live yoghurt contains culture which can support digestion. Do not be swayed though, many yoghurts are not live. Our handy tip is that if the pot of yoghurt looks earnest and Scandinavian, it’s live. If it has a picture of a strawberry wearing a cowboy hat on the front, it's probably not terribly good for you.

We should count ourselves jolly lucky as a nation that we do not have a national fermented fish dish. Were we Icelandic, we might have to eat Hákarl. This is fermented shark. It smells so revolting that people believed the fermentation process involved weeing on the shark. What foolishness! Obviously the ACTUAL fermentation process involved burying the shark and then hanging it up for five months. Which is clearly so much better. Entirely reasonably, Hakarl is not eaten much by younger Icelanders but is still enjoyed by the older generation, presumably to prepare themselves for death.

Fermented bean curd is cubes of curd that are air-dried under hay and then slowly fermented with bacteria in the air, and fungal spores. And that’s the good stuff. Commercial fermented tofu is inoculated with fungal spores. Sorry, have we made you hungry now? No? Ah.

Ah, scrumpy. This isn’t your artisanal cider, made by apples gathered in the moonlight by Somerset maidens, this is a sort of fermented apple soup that makes your eyeballs try and switch sockets after two glasses. It’s also more tannic than most commercial ciders, which explains the origins of Morris dancing. They’re not celebrating the solstice, they’re hopping about trying to get the feeling back into their epiglottis.

So there we are. Fermented foods, your cut-out-and-keep guide. Ideally cut it out and keep it somewhere warm, like the airing cupboard, and who knows what it will have turned into in a couple of months time?