The Cold Swedish Winter writer Danny Robins reveals six weird things you never knew about Sweden. Danny has a special interest in Scandinavia – apart from being happily married to a Swede, he made The Swedish Invasion. Incidentally, the Swedish word for "six" is "sex", which is pretty weird in itself…

1. Swedes are terrified of badgers

In Britain, brought up on Wind in the Willows and Rupert Bear, we tend to view badgers as cuddly or even wise, and get very upset when the word "cull" is mentioned. Swedes, on the other hand, have an inexplicably deep and pathological fear of them.

It all stems from a rather gruesome folk belief that badgers will bite on to your arm or leg and not let go until they hear the bone crack. This being Sweden though, the enterprising country that invented the car safety belt and flat pack furniture, they have come up with a clever way to deter the little furry black and white psychopaths. When badgerphobic Swedes go out walking in the forest, they stuff their socks with Ryvita-style crispbread so that, if any marauding badgers should bite, they will hear the crispbread break and be tricked into thinking it’s the sound of snapping bone. Ingenious but deeply bonkers.

Swedes eat the most sweets per capita of any nation on Earth, but they don’t have bad teeth. How can this be? Well, any Swedish kid will tell you the high point of their week is "Lördagsgodis" or "Saturday Sweets". This tradition was the brainchild of Swedish dentists, who conducted experiments in the 1940s and '50s to prove it was better for your teeth if you consumed your entire weekly allowance of sugar in one go, rather than small amounts over a longer period.

Yep, Sweden might be the nation that gave us the ABBA hit Money Money Money, but the Swedes are moving faster than any other country on earth towards being a cash-free society.

Many restaurants and shops will now only take cards; most banks won’t let you deposit money or take it out (yes, I thought that was what banks were for too); and even homeless people selling the Swedish equivalent of The Big Issue are now equipped with chip and pin readers.

The belief is it reduces crime. Ironically, the biggest advocate of ditching cash is one of the men behind Money Money Money – ABBA’s Björn Ulvaeus, who has lived cash-free ever since his son was mugged for his wallet. Money really has met its Waterloo.

Studying can be stressful and sometimes you need to let off steam. While British students do this by drinking shots and wearing traffic cones on their heads, the students of Uppsala University – Sweden’s Oxbridge – have a rather more dramatic solution. Every night at exactly 10pm, on a street in an area called Flogsta, the windows of student houses are thrown open and many voices let out a simultaneous cry of angst; a primal scream that can be heard for miles around. How "The Flogsta Scream" started is shrouded in mystery: some say it was originally a tribute to a student who died, but the tradition has now spread to other cities. So, if you thought your student neighbours were annoying, they really have nothing on the screaming Swedes.

5. In Sweden, bargain booze is forbidden

The Swedes have a complicated relationship with alcohol. Back in the 1920s, when America brought in prohibition, Sweden held a referendum to see if they should do the same. It was a narrow win for the pro-booze lobby, thanks mainly to a campaign poster by the Swedish artist Albert Engström, telling Swedes they’d have to give up their beloved summer crayfish parties if they outlawed alcohol – with the slogan "Crayfish Demand These Drinks!".

Ever since, though, alcohol has been strictly policed. It’s only available through "Systembolaget", the state off-licence – a joyless and largely beige place full of posters warning about the dangers of drinking. Any sort of discounts or bulk buy incentives are strictly forbidden. Because if an alcohol shop did deals on alcohol, that would encourage people to buy alcohol, right?

Whether all this actually makes Swedes drink less is dubious. Anyone who’s ever been on holiday near Scandinavians knows they can match the Brits drink for drink, though the eye-watering price of a pint in Stockholm would be enough to make most people go teetotal.

6. At Swedish weddings, anyone who wants to can give a speech

Whereas British wedding speeches are usually the preserve of the rather sexist, patriarchal trio of Bride’s Father, Groom and Best Man, Swedes take the democratic and egalitarian approach. Absolutely anybody (and indeed everybody) can give a speech.

I’ve always found this rather odd as Swedes are generally a fairly reserved and quiet bunch, but at weddings they really come to life (the reason may be linked to Weird Thing Number 5 above). I have been at weddings where the speeches start at 5pm and don’t end until midnight. Everybody from the bride’s parents down to the groom’s friend’s girlfriend’s second-cousin-twice-removed, do their best to make the crowd laugh and/or cry with an eloquent tribute to the happy couple.

It’s touching and, sometimes, arse-numbingly long and boring. Don’t be hoping that by the time you get to the Best Man, that’s the end of it. Swedish weddings often don’t even have a Best Man; perhaps because, in the land of socially-democratic equality, nobody wants to be the one saying "I’m the best". 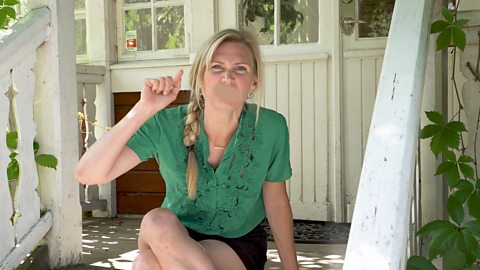 Watch our guide to some of Sweden's strangest swear words.