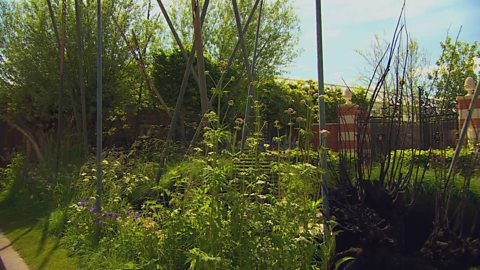 Marking the 200th anniversary of Wellington’s victory at the Battle of Waterloo and Wellington’s College’s role as his living legacy, the garden progresses from the bleakness and brutality of the Battle of Waterloo 200 years ago, through the greening and flowering of the landscape towards an a representation of the iconic architecture of Wellington College, the memorial to the Duke of Wellington. The garden’s design reconciles the drama and violence of the battle with a progressive and positive future.

Elements of the garden are inspired by the landscape and terrain of Waterloo which Wellington used to his advantage, the battle formations that successfully repelled attack, the regimental colours of British and Allied troops, the eight aptitudes central to the teaching of the College and the materiality of the College itself, marked with the personal carvings of current pupils and alumni. 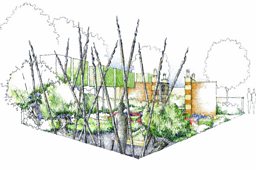 Concept drawing for the garnde

The gardens in the BBC RHS People's Choice Award 2015